Thing of the castle 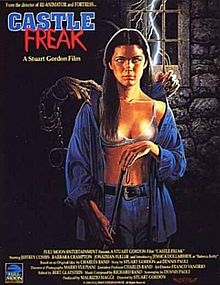 Laughter Lines: “I didn’t kill her… I fucked her okay?”

In the mid-90s, when everyone ridiculed the whole of the 80s, a film like Castle Freak was a nostalgic little outing, probably one of the last slasher films to be released under the pre-Scream formula.

A haggard old lady feeds slop to a chained beastie, lashes it, and then promptly dies of a stroke. Her big ass Italian castle is inherited by American relatives, the Reilly family: Mom Susan, Dad John, and blind teenage daughter Rebecca, whose lost sight is the result of a car accident that killed the family’s young son and the crowbar forcing Susan and John apart.

Rebecca claims she can sense somebody else in the castle but nobody believes her. One of her cane-enabled totterings leads her (and the late countesses cast) to the dungeon where the CASTLE FREAK is chained. Excited by the prospect of people in the castle, he gives up on dying, eats the poor kitty, and breaks free. 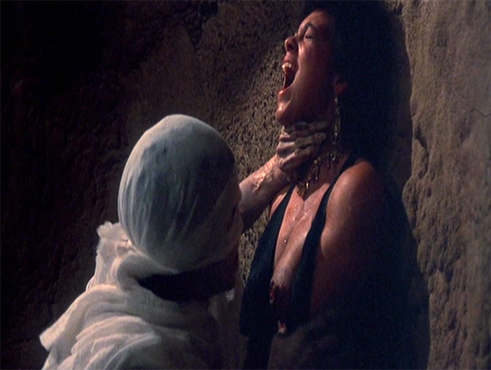 In spite of his freedom, the CASTLE FREAK in Castle Freak doesn’t immediately start killing everyone left, right, and center; he explores the joint, breaks a mirror, evades the police who are called in to investigate Rebecca’s claims, and lollops about in a torn sheet.

The ongoing rift between the parents sends recovering alcoholic John off to a local bar where he picks up a local hooker and takes her back to the castle to raid the wine cellar. After they have sex, he assumes she leaves but instead she’s captured by the CASTLE FREAK. She tries to calm him with an offer of sex but it becomes clear the Countess castrated the CASTLE FREAK long ago. Enraged, he quite gruesomely bites off one of her nipples and then seemingly kills her via cunnilingus, pausing to beat the castle’s housekeeper to death when she stumbles upon the the scene. 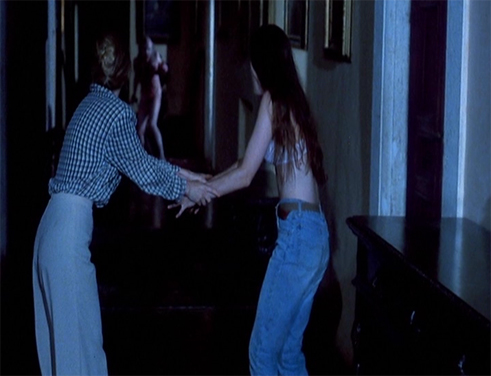 John is carted off by the local police on suspicion of doing something bad to Sylvana, during which time the CASTLE FREAK decides to pay a visit to Rebecca and soon she and Mom are on the run. John escapes the least secure cop shop in Italy and returns to the castle to face off with the CASTLE FREAK and save his wife and daughter.

Despite the crap title, generally high-cheese plot and reliance on contrivances, there’s something appealing about Castle Freak in its simplicity: Combs and Crampton are fine in their credibility-challenging roles but Rebecca’s blindness makes for an interesting feature and the CASTLE FREAK is quite a grotesque figure once he’s out in the open for the final showdown. The on-location setting lends itself nicely to the above average production values and the castle’s gothic outlay is awesome.

Watch for the hair faux pas when the CASTLE FREAK grabs Susan’s tied-back hair through a doorway; it miraculously puts itself back into position without her assistance! And the eunuch reveal moment will have all male viewers crossing their legs. A cute film, one most people will likely make fun of, but endearing all the same. 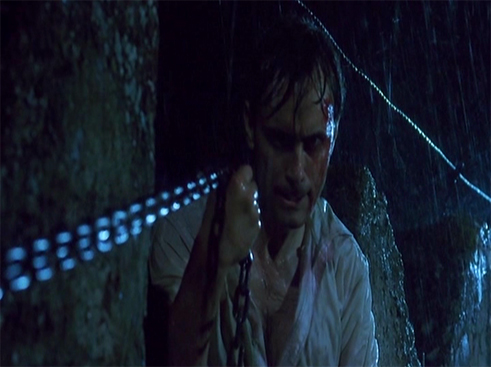 Blurbs-of-interest: Barbara Crampton was later in You’re Next; Jeffrey Combs played the hotel manager in I Still Know What You Did Last Summer and was also in Frightmare; Massimo Sarchielli was in Sleepless.

tagged with Euro-horror, Nu-di-ty, ouch, slasher, slasher films that aren't supposed to be funny but are funny