If nothing else can be learned from this video, it’s that the nickname my friend Lorna has for me – ‘Chimpy’ – is rooted in some degree of accuracy. Those ears o’ mine…

Vegan Voorhees ventured a little bit outside of its comfort zone this week by using that NCTJ qualification and conducting an actual interview!

The subject of my horror-inquisition was Phil Hawkins, director of about-to-drop Robert Englund-starring Brit horror The Last Showing, which enjoys it’s European premiere on August 22nd at FrightFest, and features that unsung head-bands and cannibals Craven-shamer, The Hills Have Eyes Part II. My life’s mission to up its rep from ‘absolute shite’ to ‘mediocre’ was on.

Read, and be excited… 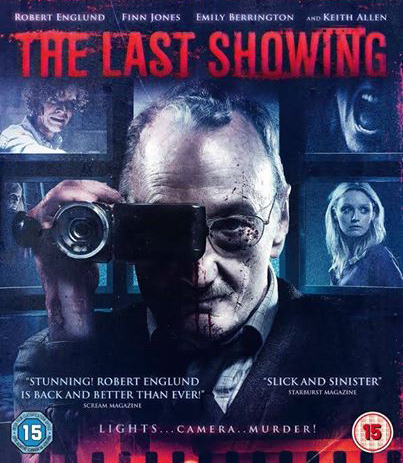 VeVo: For the benefit of anybody who doesn’t know, can you give a summary of what The Last Showing is about from your perspective?

PH: It’s about a life-long projectionist (Englund) who is made redundant at a multiplex that he’s given his life to and decides to exact his revenge on a generation that seems to no longer require his skills. Because we know everything’s gone digital in multiplexes now, and it’s a shame all these very talented projectionists have effectively become extinct. A lot have given their lives to the craft, in some cases it’s been a skill handed down through generations, so that was the inspiration behind that character of Stuart, but given a nice psychological horror twist. 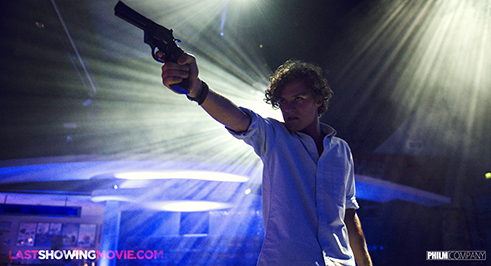 VeVo: What caught my eye when I was scanning the FrightFest line-up was the inclusion in the film of The Hills Have Eyes Part II, which is a film I am genuinely quite fond of, despite it’s ornate naffness…

PH: [Laughs] Wow! One of few I imagine… I think even Wes Craven disowned it.

VeVo tries – and fails – to justify strange love for awful movie: What are your thoughts on it?

PH: I have to say I’m probably not in the same camp as you, though I’ve obviously watched it a number of times. The thinking behind it was that as The Last Showing is a sort of meta-horror, so it’s allowed me a kind of canvas to sort of air my frustrations on what modern day horror has become. You’ll see a lot in the film of Robert Englund’s character ranting about the modern day movies, and that’s effectively my voice really. What I wanted to do was highlight the difference between horror on film and the “real horror” of what the couple is about to go through. So I wanted the most ridiculous, over the top horror movie that could be found. Given our budget we couldn’t have had the pick of anything, and also because it’s Wes Craven, and he’s a legend of horror, and we’re able to reference him in the movie, which is fun because of the connection between him and Robert. I hadn’t actually seen it beforehand, I’d heard of it because of what you hear about it, but it made me smile.

My favourite horror movies are things like Rosemary’s Baby, Carrie, The Exorcist, and A Nightmare on Elm Street, films with a bit more of a psychological slant on horror. Any film that affects your perception of reality or your own mind, that’s ultimately scarier than torture porn for me. So The Hills Have Eyes Part II was useful to show the sort of slapstick of horror, and contrast that with the couple watching it. I also like that Allie (played by Emily Berrington) is the one who is the horror nut and convinces Martin (Finn Jones) to attend a midnight screening. It does exactly what we needed it to.

VeVo: What do you hope The Last Showing will be able to bring to horror that’s kind of absent from recent output?

PH: Hopefully just that people enjoy it as a movie, but it gave me the opportunity to kind of comment on horror as a whole. I could take the tick-boxes that horror audiences enjoy and slightly twist them, because we have Robert Englund as a movie maker creating his own horror, so we’re almost able to have those cliched moments with the film-within-a-film aspect.

It’s certainly not to say that all modern horror is awful, because that’s not the case, but for my personal tastes I wanted to air a few frustrations through hopefully what is a fun and entertaining horror thriller. I wrote the kind of film I would want to see, and it’s good that it’s been embraced by horror fans and got it’s slot at FrightFest.

VeVo:  I’m sure you’re sick of being asked, but considering his legendary status, how was it working with Robert Englund?

PH: The thought of it was more nerve-wracking than the practice, but he read the script very quickly and we had a two hour phone conversation talking about the script and his character, and he had so many ideas about it and he responded so well to it. He has this encyclopaedic knowledge of cinema, he got all the little references I’d written in. It’s also a whole arc for his character, he’s not just a cameo, and he saw the fun in it. I never thought we’d get him in a million years. He has an amazing commitment and dedication on set, because he genuinely cared about the project, so it was a pleasure working with him. He has a real respect for the fans and the genre.

VeVo: So, comparably, how did the young actors (Berrington and Jones) cope as the protagonists, with the weight of acting against Robert Englund?

PH: Both are rising stars in their own rights, Finn was in Game of Thrones and Emily in The White Queen, 24, and The Inbetweeners 2, so it was an amazing crop of talent with a horror legend and the ‘fresh blood’, as it were. They brought so many ideas and different ways of approaching a scene that you might not have thought of, which is always fascinating for me as a director. The amazing energy of someone like Finn against the old-school energy of Robert creates a really interesting dynamic in their scenes together.

VeVo: I saw Finn in Wrong Turn 5 a couple of years ago.

PH: I’ve not seen that one, but I think Finn probably had some fun with that. He has a speech in The Last Showing about Hollywood photocopying something over and over against with diminishing quality, so it kind of ties in nicely. If they do so many wrong turns, do they eventually make it back around to the beginning?

VeVo: Well, Wrong Turn 6 is playing at FrightFest, so there’s a chance…

We talk for a bit about production quality (95% of The Last Showing was shot via a crane to avoid the handheld shakiness the plagues British cinema), the ‘up north’ cinema where it was shot, and return to my love of The Hills Have Eyes Part II. Phil is still not convinced.

VeVo: What’s next for you?

PH: I run a production company, so we have a slate of film we’re producing. A film called Baptism, shot on the London Underground with a slightly bigger budget than we had here. It’s a really exciting time at the moment and hopefully the horror fans at FrightFest and beyond will enjoy the film. 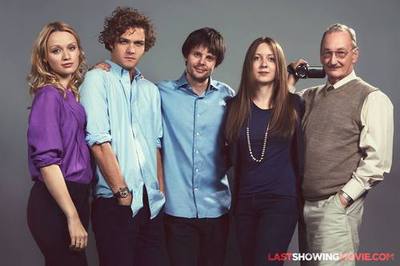 Phil Hawkins (centre) with the cast of The Last Showing

There we have it, British non-zombie horror is far from DOA after all. Catch The Last Showing at FrightFest on August 22nd, where Phil – and Robert Englund – will be taking some Q&A and then on DVD from the 25th.

Then return here where it will totally be reviewed in the near future… possibly as part of a double bill with HHE II. Which I still think is awesome.

Thanks to Paul Bradshaw for the tips.