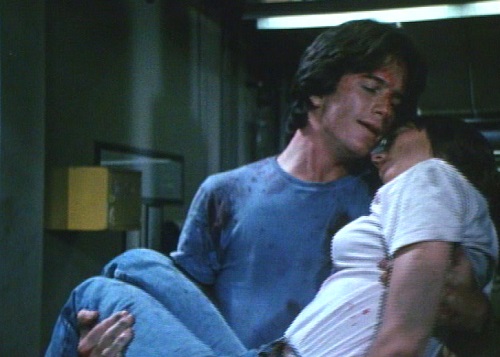 This month, the rage-baiting twist ending to oh-aren’t-we-smart teen “horror” Cry_Wolf is pushed into the processor in an effort to find out why it’s so fucking annoying.

As ever, if you’ve not seen it, then beware thy SPOILERS! 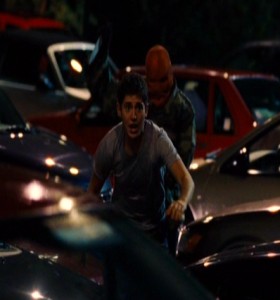 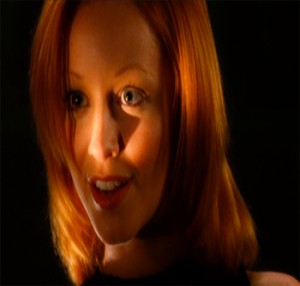 Set Up: New-boy at posh prep school falls in with a clique of prank-loving snots who decide to ‘create’ a killer by spreading rumours about a teen-hunting psycho who favours campuses and laughing as their naive schoolmates lap it up. But it looks like somebody has taken the joke too seriously and begins doing in the liars one by one…

Twist: No, they haven’t. It’s all an initiation joke-within-a-joke for new boy, who ends up shooting Jon Bon Jovi dead for a crime he didn’t commit. Unless you count his performance in Ally McBeal.

But, new boy figures out that Queen Bee Lindy Booth (whose character is called ‘Dodger’!?) set it all up in revenge for JBJ not reciprocating her advances and, earlier, had shot dead his shag-piece. She played ‘em like a piano.

Problems with this revelation: It’s just shit. It’s not clever. It’s no more inventive than a Murder, She Wrote episode and, worse still, it does this under the guise of being a horror film. A horror film so cram full of horrible, horrible teens that the revelation that none of them are dead is the only thing likely to induce a killing spree.

Who on God’s earth thought that anybody would want these over-privileged, calculating, little fuckers to live through it?

Likely explanation: Stupidity or, possibly, it was written by an ex-prep school brat whose time at said academy is blessed with memories of camaraderie, joyous pranks, and laughing at the have-nots.

An unforgivable insult to a genre it so clearly thinks it’s better than.

This month, it’s that weirdo ending to Halloween 5 (the one they pretend wasn’t suffixed The Revenge of Michael Myers) that goes under the microscope. So if you’ve still yet to see it, STOP READING HERE!

Set Up: Michael Myers, thought dead at the end of Halloween 4, which threw up its own slightly stupid twist of its own, “reactivates” as Halloween 1989 approaches, and decides to spend the season doing the usual thing of killing everyone to get at his niece, Jamie (Danielle Harris – who’s awesome).

But who’s the guy in pointy boots we keep seeing loitering?

Teenagers, family members, and numerous cops die, until Dr Loomis (also awesome) and the Sheriff set up a sting-op to capture Michael once and for all…

Twist: The sting goes successfully and Michael is banged up in a Haddonfield jail cell but just as Jamie is about to be reunited with her family, gunfire rings out inside the cop shop, she eventually ventures inside when nobody comes to help her and finds all the officers dead and Michael gone.

Pointy Boots has shot up the joint and broken Michael out. Who is he? Why does he want Michael? Do we have to wait a whole year to find out?

Problems with this revelation: No. Because Halloween 5 “performed disappointingly” at the box office, all plans for Halloween 6 went on hold. FOR SIX YEARS.

While you can almost admire the producers for trying to shake things up with this subplot, which I guess they assumed would be all exciting and lead into a whole new exploration of Michael’s origins and motivations.

When some of this stuff IS backfilled in Halloween 6, it’s insubstantial, boring, and suggests that Pointy Shoes ‘created’ Michael, despite the fact he’d killed his sister before ever coming into contact with him. Duh.

As Halloween 5 grinds on past its welcome, it’s just a shitty ending. You’re tired from the relentless screaming and running and the overlong scenes at the suddenly mansion-sized Myers house. But what else could they do? Slasher films were coming to grinding halts in terms of profit by the end of the 80s. They put Jason on a boat and had Freddy haunting a baby. Compared to that, Halloween 5 is at least grounded in some sort of reality.

Likely explanation: Exhaustion of a marginal idea. When the series is only about a guy who wants to kill his sister/niece/great-nephew blah blah blah, how long can it really go on for? How many people have died in order that Laurie, Jamie, and later Baby Stephen, survive?

So we know Jason and Freddy are essentially no different; Freddy especially has a limited number of victims before he got greedy in Elm Street 4, whereas Jason is just happy to kill, Kill, KILL! without particular reason other than liking it.

Michael’s “eradicate the family” motive could only go on so long.

They tried, it sucked, Rob Zombie came along. Ugh.

This time, marvel at the double-twist that adorns the climax of Italiano-but-in-English flick, Shadow. As ever, if you’ve not seen it, QUIT READING NOW.

Set Up: Recently done-with-Iraq/Afghanistan American soldier David (Jake Muxworthy), delays his return home for a cycling vacation in the beautiful scenery of somewhere. I can’t remember if they even tell you what country he’s gone to. I digress, he befriends fellow-pedallar Angeline and they piss-off some redneck hunters before all four find themselves captured by a Gollum-esque sadist who enjoys torturing the men… David escapes to save Angeline but –

Twist: …it was all a dream. Well, a coma-imagined limbo-cum-fighting-to-stay-alive thing. David’s in hospital after he and his squadron fell on a landmine. The redneck guys are two colleagues; Angeline is the nurse; the killer-dude was clearly death on legs.

And speaking of legs, David has none left below the knee. Something that will undoubtedly thwart the planned cycling trip.

Problems with this revelation: It’s just naff, isn’t it? The kind of miracle twist you’d write at school thinking you’d fooled everybody! What’s worse, the limbo/fighting-death thing was done in Soul Survivors, although in that trash only good, middle-class, white, heterosexual, Christian teenagers were able to make it back.

Likely explanation: Decently cruel no-legs twist notwithstanding, Shadow seems to have been reverse engineered from the twist backwards. At 75 minutes, it’s a short affair, and with a decent edit could probably form part of an anthology to greater effect than a feature in its own right.

Disappointingly, aside from the gorgeous scenery, there’s little else in the film that hasn’t been done before. The torture scenes look like off-cuts from Hostel and the stalk n’ slashing is curiously tame and largely off-camera.

Today, marvel at the utter stupidity that adorns the end of I’ll Always Know What You Did Last Summer, one of the longest titles with one of the crappest codas. As ever, if you haven’t seen it and don’t want to know, BEWARE ONCOMING SPOILERS!

Set Up: Four teenage friends in a small Colorado town cover up their prank that left a friend dead and the local cops looking for a killer that never was. One year later, they are tormented and stalked by The Fisherman, who knows what they did last summer…

Twist: The Fisherman is a ghost who appears when there are secrets to be reckoned with.

Likely explanation: It’s a mind boggler – perhaps they wrote themselves into a corner or they thought it was clever leading everybody down the standard who-could-it-be? route only to spring on them that the legend has taken on supernatural properties and can go where it wants. Either way, it’s awful. Awful, awful, awful.