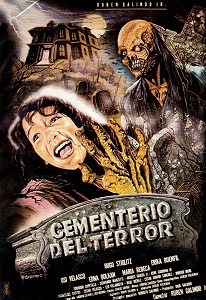 I can only hope/imagine that early production meetings for this project when kinda like this:

80s horror movies don’t come much more fun than this kitchen-sink Mexican export, which shamelessly decides to throw basically everything into the pot and gleefully play in the mess. Though the a.k.a. title Zombie Apocalypse is a stretch and probably pissed off more than a few z-fans.

A stubby-fingered Devil-worshipping psycho killer known as Devlon is finally shot and killed by cops after claiming one last victim. His ex-Doctor is blamed by the police Captain for everything, but the Doc is hellbent on seeing the body cremated before anything else can occur. Nobody listens. Sigh. 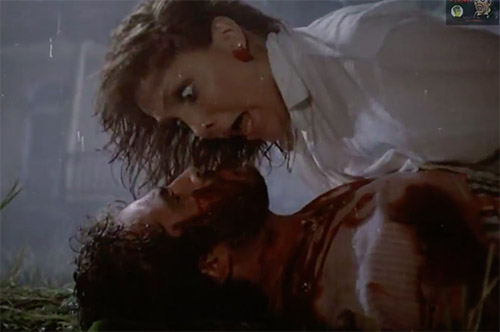 Meanwhile, three teen couples go waterskiing on a lake and then the boys arrange a private party at a mansion house to try and get into their respective girlfriends’ pants. Turns out they miss-sold the fiesta, and it’s actually just the six of them in the Mexican sister home to Garth Manor. Massively unimpressed by this, the girls demand to leave, but Jorge finds a creepy old book belonging to Devlon in the attic, and convinces his buddies to try a little Halloween night seance. Oh yeah, it’s also Halloween.

Elsewhere, some children are going trick-or-treating and plan to visit the cemetery, one of whom sports an awesome jacket with Michael Jackson on the back. More from them later.

The stupid teens drive to a morgue and choose guess which body for their prank? For reasons unknown the girls play along as Jorge reads from the book with the body lying on a grave back at the cemetery. Then it begins raining, so they bail. Too late though as Devlon has been resurrected and doesn’t take kindly to the home invasion of big-haired teens and their loud party choons.

Meanwhile, the five children arrive at the cemetery and explore. 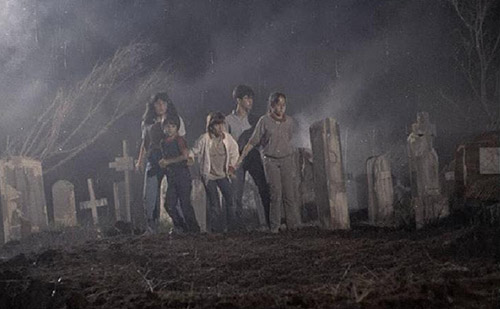 Re-meanwhile, Devlon begins eliminating the sexy-teens one by one, slashing them up with his bare hands, disemboweling some, and using some spooky mojo to possess an axe into whacking another guy in the face. These scenes pleasantly reminded me of Hell Night for some reason: Primal killer with claw-fingers, spooky old mansion house…

The Doc and the police Captain spend forever driving around when El Capitan is informed by his missus that their kids are missing. Doc steals the car and goes off looking for Devlon. The next few times we see him he’s just driving around achieving nothing while people are dying all over the place.

The children are soon spooked by a sudden flashfire coming from a grave and peg it, only for the dead to start rising around them at every turn. Why this happens now I’m not sure, maybe Devlon did something with the book? But the kids run to the house, find bodies, scream, doors lock themselves, Devlon appears, they run back into the cemetery, more zombies… It goes on a bit, this section, until the Doc rocks up (finally!) and informs the kids they need to destroy the book. 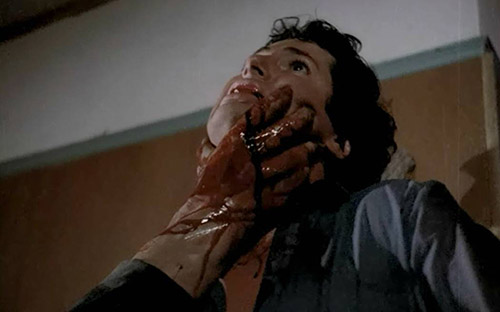 Cemetery of Terror is like a 91-minute parody of 80s horror movies, with almost every cliche checked off the list (bar nudity, curiously) but boring it is not. In spite of the overlong scenes of the five kids running and shrieking – Galindo should’ve gone all out and killed one or two of them off – this is one full salad, with a full moon, creepy mist, a storm, falling trees, mausoleums and crypts galore. Throw in the gratuitous over-acting and it’s like a cross between a Simpsons ‘Treehouse of Horror’ segment and one of those interactive Halloween walkthroughs done right.

tagged with get your own ideas!, gore o'clock, hair don'ts, slasher, slasher films that aren't supposed to be funny but are funny, the 80s