CHILDREN OF THE CORN II: THE FINAL SACRIFICE 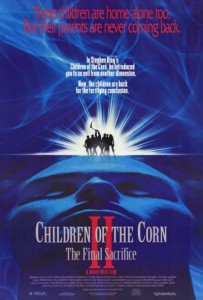 “These children are home alone too. But their parents are never coming back.”

The first of the countless ‘crap from the corn’ follow-ups to 1984’s King-adap Children of the Corn, in which couple Peter Horton and Linda Hamilton were tormented by a cult of evil kiddies who worship a corn-dwelling monster they call He Who Walks Behind the Rows. It sank critically but obviously did something right to have amassed six follow-ups of varying competence and a truly horrendous TV remake.

The Final Sacrifice is a stupid film but nevertheless an entertaining one, picking up the story just days after the events of the then eight-years-gone original. The mass-parenticide of Gatlin is discovered and the liberated children are bussed off to nearby Hemingford while the investigation takes place. Tabloid journo Knox arrives in town with his estranged, obnoxious, chipmunk-faced son to get a scoop.

Meanwhile, repatriated corn child Micah is ‘possessed’ by something and becomes the new leader of the kids, all dressed in 1800s peasant clothes and with dork-ass names like Mortichai and Jedediah (it would’ve been great if just one was called, I dunno, Shane?) Micah is a tad effeminate and therefore, in lazy film terms, evil. He preaches his adult-hate to the others (“we’ve seen their world, it is evil, blah blah, corn, blah, He Who Walks Behind the blah…”) and they begin offing the over-19’s of Hemingford. 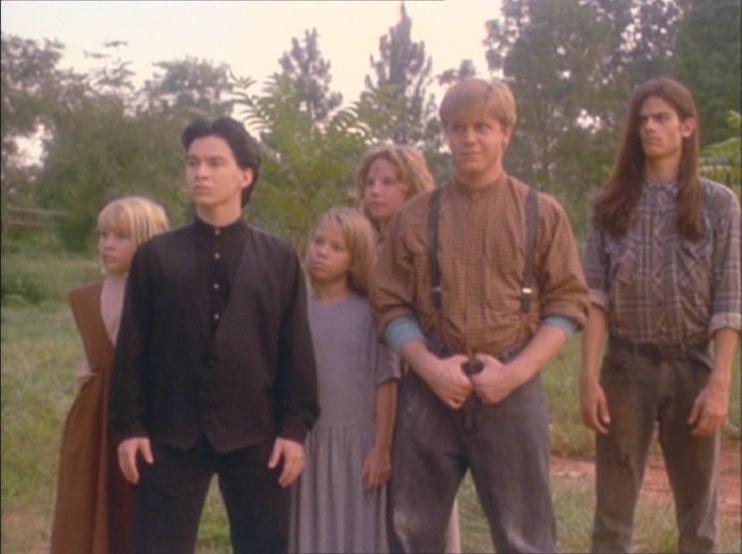 Chipmunk-face hooks up with local blonde hottie and his dad follows suit with B&B-owner Rosalind Allen and her early 90s Wilson Phillips hair, while the brats start their spree o’death, crushing a crazy old lady beneath her house in what seems like the most contrived method of sending up The Wizard of Oz they could conjure up. The nosebleed-from-hell (albeit in a church) is grisly and the electric wheelchair kill is funny as fuck but things begin to get boring as credibility is stretched thinner than Victoria Beckham’s waistline.

Journo-man meets an all-knowing Native American, who has lots to say about his ancestors, being at one with spirits and stuff and they decide to blame everything on a contaminated corn crop. Micah recruits Chipmunk-face and decides to sacrifice hot-girl and Wilson Phillips-head, setting it all up for a ‘do the right thing’ ending, which involves Micah shouting lots of crappy dialogue, him turning into some horned-demon thingy, and being sucked into the blades of a combine harvester.

The entire Children of the Corn franchise is ropier than a lasso contest, with even less film-to-film consistency than Friday the 13th, but it maintains a sort of late night, fuck all else to watch charm with an effective score of choral properties, cheap scares and dead-eyed kids killing their folks in sometimes inventive ways. II is more fun than most of those that followed (#5 was pretty good too), a slasher off-shoot with the ever-elusive He Who Walks Behind the Rows being referenced yet never explained or seen. This film is like junk-food, empty and worthless, full of crap but it tastes good!

Blurbs-of-interest: Wallace Merck was one of the paintballers in Friday the 13th Part VI: Jason Lives; Christie Clark was Jesse’s little sister in A Nightmare on Elm Street 2; the nosebleed guy (Joe Inscoe), played the principal in Cherry Falls.