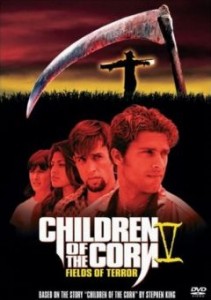 CHILDREN OF THE CORN V: FIELDS OF TERROR

“In a deserted town the terror continues!”

My favourite Corn sequel from the indefatigable series (presently gearing up for an 8th instalment) is stupid, cheesy and has almost no connection to the previous films outside of horrible children, corn, and the ever-invisible He Who Walks Behind the Rows.

This time, a group of college kids drive out into the boondocks to scatter the ashes of a recently cremated friend, who apparently died bungee jumping!? When they crash their car, a group of mouthy little brats emerge from the cornfield to tell them, in no uncertain terms, to fuck off – which is rich coming from them considering they slaughtered a couple of the group who were driving ahead of the others just hours earlier.

After meeting Kane Hodder and spending the night in a seemingly abandoned farmhouse, dreary heroine Alison realises that her runaway brother is actually part of this very sect!!! 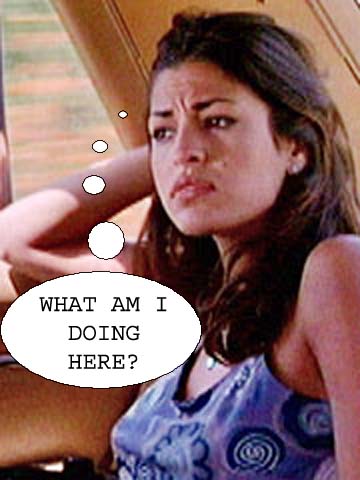 coincidence, she elects to stick around and try to rescue her bro, prompting the others to stay too and get mauled by the delinquents: star-to-be Eva Mendez reads approximately one page of the cult’s anti-adult bible and decides to join them, willingly throwing herself into a fiery silo. Others are impaled, sickled, slashed with machetes or blow themselves up, taking some of the murderous moppets with them until only sensible-haired Alison remains to take on the uber-obnoxious child leader, who is in need of Supernanny, big time.

Fields of Terror, like the previous and subsequent instalments, makes little sense, adopting a scattergun approach of cult-cum-slasher movie antics: it’s liberally bloody and occasionally brutal and somehow roped David Carradine into playing the adult leader of the sect. There’s some zesty photographic setups but the flames fizzle out with another boring finale and CG-tastic last second gasp moment.

If you can ignore just how remedial all of this is and don’t mind chowing down a big bowl of obvious, Corn V is an entertaining 80 minutes with comfortably predictable scenarios and quite a likeable cast, peppered with familiar faces – even if most of them clearly look like they don’t want to be there.

Blurbs-of-interest: Eva Mendez/s returned to the genre a couple of years later in Urban Legends: Final Cut; Adam Wylie was in Return to Sleepaway Camp; Alexis Arquette was in Bride of Chucky; aside from playing Jason four times, Kane Hodder has appeared in Behind the Mask, Hatchet and all of its sequels; David Carradine was in Fall Down Dead and Detention (2010).