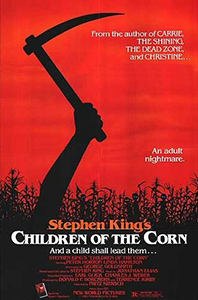 CHILDREN OF THE CORN

“…And a child shall lead them.”

Stephen King adaptations are notoriously hit or miss. For every Carrie or The Shining there’s a Langoliers or Carrie remake. It’s weird to think, given how many of his tales have been put to screen, that none have ground on as long as the Children of the Corn franchise, currently at a whopping ten instalments, including that wretched TV re-do of the origin story.

What is it about this series that keeps the increasingly unrelated sequels coming? You’ll get nothing but a huge shrug from me. Some of them are enjoyable (2 and 5 spring to mind) and some are akin to anaesthetic-free root canal surgery. But as with most horror series, the first one is, well, not head and shoulders above the rest, let’s say the least offensive. Helps that it made over $14m from a $1.3m budget (of which King reportedly took a good $500k). 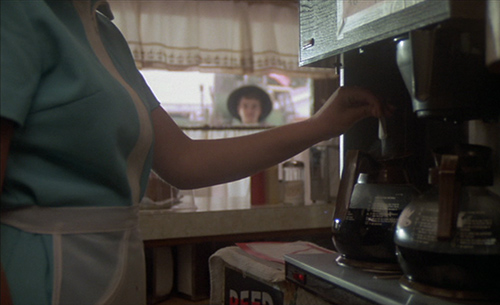 On a Sunday morning in the small farming community of Gatlin, Nebraska, all the kids go apeshit and murder the adults. Does this lead to a non-stop party town? No, if anything it becomes even more stick-up-its-ass religious, as everyone under nineteen follows the nonsensical cult BS of self-proclaimed messenger of God, Isaac (a suitably creepy Franklin, who was a good casting choice). The corn-god they worship – He Who Walks Behind the Rows – speaks “only” to Isaac but, unlike most cults, doesn’t say he can sleep with all the girls but no one else can. Actually, it only seems to say kill the adults. 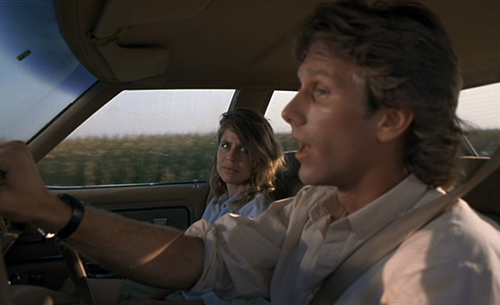 Cruising by on their way to Seattle are Burt and Vicky (Horton and Hamilton), a young-ish couple in a stalled relationship: She wants wedding bells, he wants career options. While bickering as they do, they don’t see a boy totter into the road and subsequently mow him down with their car. Fortunately for their conscience, his throat had already been slashed by somebody moments earlier. They seek help from a garage and are told by the crotchety old mechanic (the only adult spared in an effort to keep outsiders away) to go into the town of Hemingford for help as nobody in nearby Gatlin will be of any help.

Fate has other plans and every intersection points only towards Gatlin so they give up fighting it and roll into town, where they soon discover an apparent lack of parental supervision, only aggressive teenagers. The only exceptions appear to be siblings Job and Sarah, who are immune to HWWBTR’s influence. Burt goes off to find help, while Vicky stays with Sarah – who can draw the future!!! – until she is abducted by a group of kids, led by sour-faced head enforcer and shouter of ‘outlandeeeer!’ a lot, Malachai (Gains), for sacrifice. Rescue mission, defeat the baddies, escape, blah blah blah. 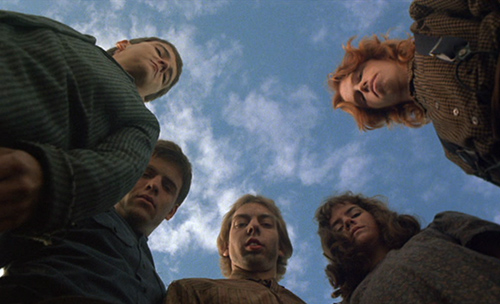 I can’t really pinpoint the appeal of Children of the Corn. It’s almost universally loathed (including by King, whose screenplay was re-written by Goldsmith), makes little sense, and lacks any sort of resolute climax, and what there is was drastically changed from the original story. Acting from the younger thespians is occasionally bumpy, though Gains and Franklin – as the in-need-of-a-slap Isaac – are effective and carry most of the weight – their bitchy arguments are also pretty funny. It could be the whole 80s-ness of it, the lack of explanation native to a lot of King’s writing, the Omen-lite choral music, or the supernatural variance on expected clichés – I mean, is it really a slasher flick? No, but it shares enough turf and visual motifs to kind of be included on the fringes – with shoulders-down shots of creeping loons closing in on unsuspecting victims, holding implements of destruction, boots slowly stalking from behind things… 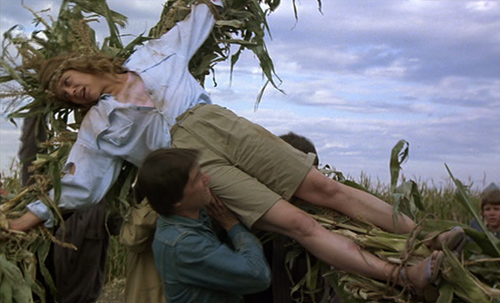 My family are evangelicals so the whole anti-religion subtext is pertinent. There’s also the fact that Isaac looks and acts almost exactly like someone I couldn’t stand from years ago. Punchable. I wouldn’t be against a high-end remake of this – the 2009 attempt was a headache in every aspect – and I guess they’d cast a bunch of GAP Kids models, but for now I guess they’ll just keep on churning out the cheaper and cheaper looking sequels.

Blurbs-of-interest: Peter Horton was in Fade to Black; Franklin resumed the role of Isaac in Part 666; Gains was in The Landlady.

tagged with before they were famous, children are evil, the 80s