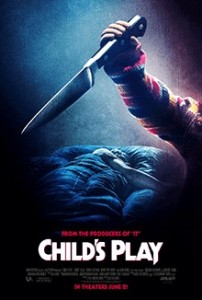 Laughter Lines: “Can I just point out that this is how every robot apocalypse scenario begins?”

Despite being about the only major horror franchise that’s stuck neatly to its story arc over seven films, it was only a matter of time before someone remade Child’s Play. It’s Hollywood, nothing is sacred. Jaws is swimming scared.

In defiance of the odds though, the 2019 re-tooling actually launches the series into quite a different direction that the possessed doll that cuts his way through many an adult, cussing merrily as he goes. While not able to necessarily co-exist with its former self in the way, say, the 2009 Star Wars movie did, it’s not like watching somebody overhaul the original and make it all meta n’ shit, it’s a new story with a similar looking doll who goes by the same name and slashes up folks. Thassit.

At a sweatshop factory in Vietnam, a beleaguered worker is fired by his boss, told to complete the Buddi doll he’s working on and GTFO. In a fit of rage, the employee disables the violence and language parameters (curiously all displayed in English on his screen) then throws himself out of a window.

Some time later, the doll is returned to Zed Mart as defective, and young mom Karen decides to gift it to her lonely 13-year-old son Andy, lest it end up in landfill somewhere. Nonplussed by the doll-for-kids, Andy nevertheless plays along and finds that Chucky’s screwy A.I. is quite capable and entertaining: Like a faithful friend, he listens and interacts – his only mission, to ensure Andy’s happiness.

As is the case in all robots-will-destroy-us yarns, Chucky takes everything Andy says literally, starting by trying to choke the family cat after it scratches him. Then when Andy wishes that his mom’s asshole boyfriend Shane would just go away forever, and souped up on the data gathered from witnessing watching Andy and his (human) friends LOL along to Texas Chainsaw Massacre 2, Chucky deduces violently killing Shane will lead to Andy’s happiness. All the while, Chucky becomes weirder and more attached to Andy, replaying the sounds of the tortured cat at night, and appearing in all sorts of unexpected places, eyes eerily glowing.

After a gruesome lawnmower death, Andy and pals are left to try and dispose of some body parts, which inadvertently end up on the shelf of the apartment down the hall where the mother of the requisite cop lives. Chucky is disabled and thrown down the garbage chute, only to be picked up by the building’s perverse custodian, who thinks there’s money to be made from the doll on eBay and so restores it.

More killings occur, and the unveiling of the Buddi 2 range at Zed Mart serves at the battleground for the final showdown, where Chucky’s ability to sync with other devices provides an army of psychotic toys to reap carnage on the midnight shoppers, such as drones with razor sharp propellers and creepy Teddy Ruxpin-like bears that lethally bite patrons.

All of the canon films in the Child’s Play series are, to me, decent. The quality is remarkably consistent throughout, with none being awesome nor dogshit. So I’m not too precious about this, though I feared it might’ve been watered down PG-13 stuff given the Stranger Things-stylings chatter that preceded its release. Thus, I was surprised when it turned out to be pretty fucking gory in places, and curiously restrained in others: The lawnmower and table-saw denouements are a gruesome riot, whereas the big finale came across quite dry in comparison.

This would be just fine as a sort of ‘what if’ companion piece to the other films. There’s no real need for a sequel here, I mean, what direction would you even go with? It’s literally a film about a faulty appliance. Return it for an exchange or refund.

tagged with after they were famous, gore o'clock, remake, slasher, yo! Hollywood