Day Two: I reviewed Child’s Play 2 some while ago, so it’s a hop, skip, and a jump (unless you’re three-feet-two, Chuck) on to the one that got blamed for a few things, Part 3… 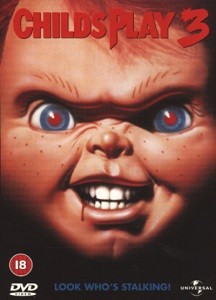 Just as the folks at Camp Crystal Lake never learned and keep re-opening the joint, so the Good Guys toy manufacturer fails to learn from all the deaths linked to their product and keep resurrecting it.

Some of Chucky’s blood from the molten plastic heap he ended up as at the end of CP2 leaks into the production of a new batch and thus gives him a new body. He celebrates by tormenting and killing the CEO of the company, after he brands consumers idiots.

Eight years have passed and Chucky uses a computer to track down Andy’s whereabouts (he does this in about 16 seconds despite eight years of software upgrades), discovering he’s been packed off to the Kent Military Academy. 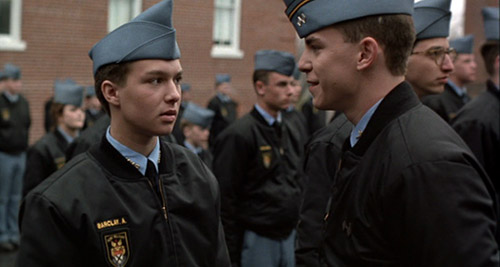 Naturally, Chucky appears soon after but instead of being unwrapped by Andy, he’s picked up by pre-teen cadet Tyler, who, under the new-body rules, is now the target of Hide the Soul. Andy’s attempts to stop Chucky rile bullying Colonel Shelton, but draw the affections of fearless female cadet DeSilva (watch her awesome hair shake-out as the sadistic barber happens by).

So it’s death by garbage compactor, grenade, and terror-induced heart attack until the ghost train finale, which seems a bit contrived, even by the standards of this series. Creator Don Mancini was allegedly pushed into writing this outing without much preparation time and considers it the least impressive of the lot, which is a fair summary. 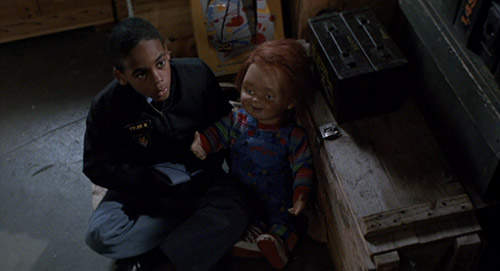 Now, the film’s bizarre legacy has gained more notoriety than the picture itself: When two 10-year-old boys abducted and murdered a two-year-old in the early 90s, Britain’s infamously shitty tabloid press decided not to question parenting or social issues that led to the crime, no, they pointed the finger squarely at horror movies, in particular this one, which had been rented by the stepfather of one of the boys some months prior. 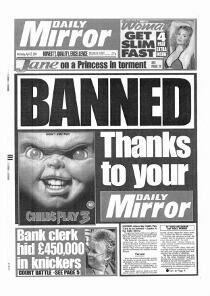 Complete bullshit. Nothing was banned.

Never mind the fact neither of them had seen it, or that none of its content tallied with the crime, it was evil and must be banned, said the likes of The Sun and The Daily Mail, unquestionably THE worst newspapers in the history of print media. One paper even tried to encourage people to burn their horror video cassettes in a sad echo of the 80s ‘Video Nasty’ bollocks, and The Mirror praised itself for ‘banning’ Child’s Play 3 on its own front page – about the only time Chucky will get that accolade.

Coinciding with this but hardly reported on at the time, a teenage girl tortured and murdered was played a sample of Chucky’s infamous ‘wanna play’ utterance at full volume by a group of scutty assholes who killed her over a stolen coat!

As with these papers and their ilk, it was all lies. The film was not banned, it was simply withdrawn by the distributor CIC, the knock-on effect of which was that incoming psycho-child flick Mikey was refused a BBFC certificate. Nothing banned, nothing achieved by hack right-wing morality play journalists. The film reappeared within a few years, notably sporting an 18 certificate instead of the 15 granted to the first two movies.

Homicidal cockwombles will always exist and moral guardian tabloid wannabes will always find a sub-cultural scapegoat, be it horror movies, video games, or Marilyn Manson tracks, but never their own media moguls who exploit tax loopholes and lie to the masses in order to save more money. Nope, never them. 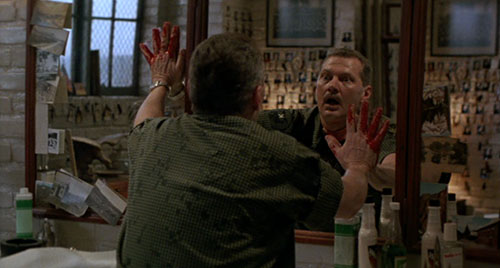 All this drama aside, it’s probably the least fun entry in the series, but a moderately enjoyable hour-and-a-half nonetheless and the military school setting is good, if not used to its full potential. And fuck you, tabloid liars.