City of the Doll

Cult of Chucky is pending. I noticed I’ve only reviewed two of the other films in the series, so let’s countdown to the release by rectifying that… 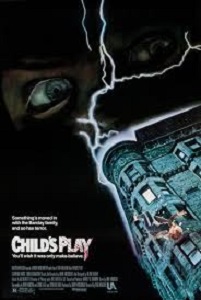 “You’ll wish it was only make believe!”

Laughter Lines: “He said Aunt Maggie was a real bitch and got what she deserved!”

The inauguration of a horror icon begins here with the hokey but fun enough debut, which gives us all the information we need as to how the spirit of the Lakeshore Stranger – Charles Lee Ray – projects his soul into a talking Good Guy doll using voodoo mumbo jumbo.

Said talking doll is purchased from a homeless guy by hard-up widow Karen Barclay, for her six-year-old son Andy’s birthday. Andy is overjoyed with his new friend, and soon begins relaying the slightly odd things Chucky is apparently telling him. This is bad news for his babysitter, who receives a blow to the face from a toy hammer and tumbles out of an apartment block window.

The homicide detective from the Strangler case is assigned and immediately suspects Andy of the killing and the death of the Strangler’s accomplice soon after. Andy is packed off to a clinic for observation, blaming Chucky who, of course, just prattles off his three phrases. 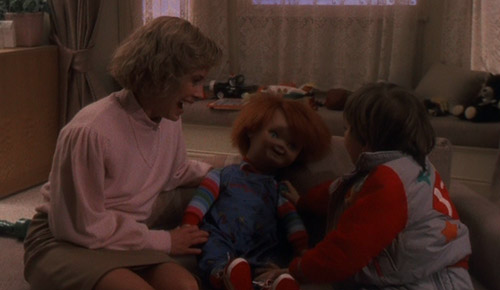 Karen is quick to discover that there is more to Andy’s story when she finds the batteries that came with the doll are still in the box, in what’s easily the film’s creepiest scene. She tries to convince the detective but his instinct is to believe she’s just trying to protect her son from the consequences but then stumbles upon some coincidences between the case and that of the Strangler. Da-da-daaaaa!

Chucky himself finds that the longer he stays a doll, the harder it will be to find rebirth into a human soul and the more vulnerable to harm he becomes, and the only viable soul is that of the first person he revealed his true self to – Andy.

Relatively high-end production values distinguish this film from the dying slasher genre at the end of the 80s, raking in decent profits as Jason, Freddy, and Michael experienced diminishing returns. Child’s Play achieves its distinction – and probably a chunk of its success – to avoiding most slasher movie rules, at least in this first one, with murders by accident or voodoo as opposed to the doll-with-a-blade in the sequels.

A fair amount of debt should be owed to Freddy Krueger, as Chucky soon becomes efficient with his potty-mouthed one-liners in Brad Dourif’s inimitable drawl. Imitators soon appeared in the shape of Puppetmaster (and its ten sequels!), Demonic Toys, Dolly Dearest, and even the more recent Annabelle, proving a degree gold had indeed been unearthed.

A lot of weight also rests on the shoulders of Alex Vincent who, aged just seven, does well with the dark material without descending into territory of annoying child who the audience secretly wants to see thrown into a meat grinder (see Absurd for that kid). He also gets to utter that awesome climactic line: “This is the end, friend!” For her part, Hicks does a great job as his beleaguered Mom and defacto final girl. 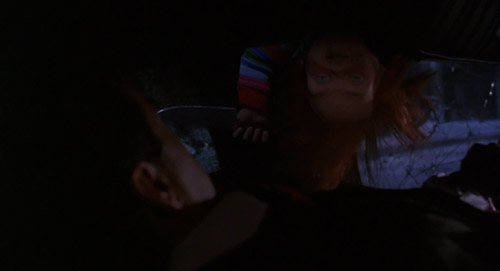 Mancini’s original script was far more psychologically based, with the doll serving as an excuse for Andy’s psychosis and a critique of the marketing-to-children boom in the greed-obsessed 80s. Everyone remembers the urban legend about Cabbage Patch Kids right? As it is, despite the final act descending into outright parody as the doll that just won’t fucking die, something of a modern classic in spite of itself.

Blurbs-of-interest: Hicks was another Mom-on-the-run in 1982’s Death Valley, which featured another pre-teen kid as the lead; Alex Vincent returned for the next film as well as Curse of Chucky and Cult of Chucky; Brad Dourif was also in Chain Letter, Color of Night, Dead Scared, Rob Zombie’s Halloween movies, Trauma, and Urban Legend.