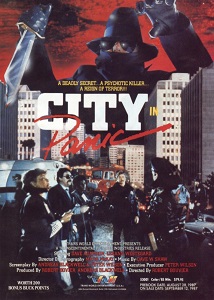 A.k.a. The AIDS Murders

“A deadly secret… A psychotic killer… A reign of terror!!!”

Those of us old enough to remember playground taunts of the 1980s will doubtlessly recall other kids screeching “You’ve got AIDS!” at the top of their shrill little lungs. This film is largely the embodiment of that. And that Team America song Everyone Has AIDS.

A serial killer in a black coat and a fedora is slashing up (mostly) gay men and carving an M into their torsos. Straightforward homophobia? Being the mid-80s, you’d think so, but as City in Panic unfolds, while the gay community is largely without a voice, the only anti-gay character is coded as an idiot detective and shouted down several times.

Radio talk show host Dave Miller is at war with another journalist, whom he accuses of exploiting the situation for readers, and investigates on his own, arguing with his enemy and a radio shrink who says it’s “too soon to say” if the killer has an agenda given the sexuality of most of the victims. 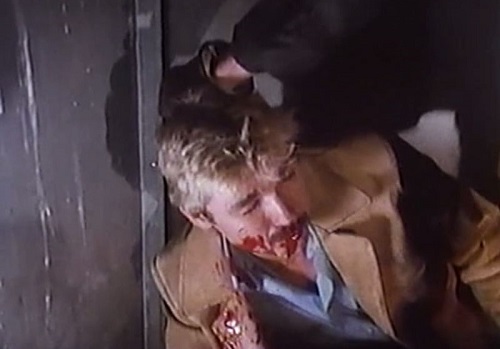 Intermittently, men ‘doing gay things’ are stalked and killed. Only a couple of them have any dialogue: A bartender from Dave’s choice tavern who is caught doing inverted sit-ups in a deserted gym, and a security guard sticks his cock through the wrong gloryhole. Refreshingly, the film doesn’t overtly condemn any of them, and Dave educates his dim girlfriend on a couple of points when she compares AIDS to the Plague.

The killer’s identity becomes obvious at the clock runs down, although it wasn’t entirely clear beforehand, although the use of the ‘M’ is pretty random and pointless, but as they wail “They had AIDS!” when confronted by Dave, I couldn’t not fall about laughing. HIV, by the way, doesn’t get a look in. Seems like in this universe you get AIDS, and a short time later you’re gone.

A bad movie, but not necessarily a bad-hearted one. The producers latched on to a hot topic and rode with it, which was a brave choice for this era, politically. It’s just about balanced enough to be neither here nor there, but as a comedy is an absolute riot.

And, honestly, some of the fashion on show is more offensive than anything.

tagged with Canuck, gay stuff, Nu-di-ty, slasher, slasher films that aren't supposed to be funny but are funny, the 80s