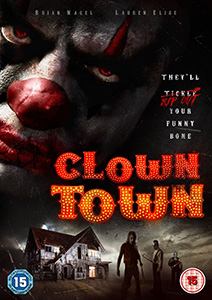 So the credits roll and there are four Nagels in the cast, executive production, production, direction… Keep it in the family, I guess, which works out well for this combo of Wrong Turn and any of the 90s Children of the Corn sequels.

A nubile young babysitter is slain by one of her charges, dressed as a clown, at the Strode house. Fifteen years later – never fourteen, never sixteen – two couples on their way to a concert are derailed when the promise of the return of a lost phone takes them into the abandoned town of Clinton (yes, I rolled my eyes too), where they wait around until deciding to move on and finding their car is dead.

Some wandering later, they are set upon by a group of weirdos all made up like clowns who attack with various implements and chased around until one of the girls is abducted and an old man rescues them. He tells them that a train crash on the night of the babysitter murder killed the town, people packed up and left, and the clown murders began, fronted by the grown up kids from the preface.

Mucho running and screaming ensues, fighting, people are captured n’ stuff… nominal hero Brad saves the day because the girls are incapable of much beyond shrieking, and almost everything you think will probably happen next happens next.

Teebs, ClownTown isn’t dreadful. It looks alright, the acting gets by, there are a couple of almost-eerie shots and situations, but it suffers most from being way too predictable: A garbage truck appears at one point and I knew that someone would end up squished by the campactor; I knew who would survive – villains included – and who would stagger on to screen for the final shot; I knew that Brad would spring into the frame and put his hand over his girlfriend’s mouth to stop her screaming. I knew too much.

ClownTown brought to mind recent fishermen-of-death Xerox The Watermen in both approach and quality (i.e. not completely DOA but you’d struggle to pick it out of a lineup).

Blurbs-of-interest: Director Nagel acted in Jolly Roger and The Butcher; Chris Hahn was in Axe Giant.

tagged with get your own ideas!, slasher