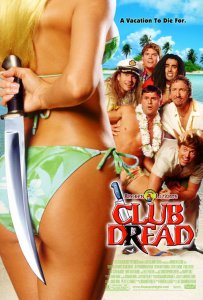 “A vacation to die for.”

Laughter Lines: “There’s always one guy like you who wants to shit in the apple pie. But you just shit in the one apple pie that knows how to shit back.”

Pitch this one halfway between Scary Movie and Behind the Mask. A huge flop at the box office (taking less than it’s production budget worldwide), Club Dread probably just came at the wrong time. Slasher movies being considered the lowest form of horror as it is, parodying them is likely seen as too easy a route to take in comedy as well.

Coconut Pete’s is a Spring Break-type paradise island for hedonistic youth, run by the titular stoner ex-rock star (Paxton, who is awesome), a sort of Ozzy Osbourne by way of the Beach Boys, and a staff made up of the Broken Lizard guys: the DJ, tennis pro, divemaster, ‘Fun Police’, and Lars, the new masseur. There’s also Jenny the aerobics instructor (played by ex-Sweet Valley High twin, Daniel).

We’ve already seen a ménage à trois interrupted by the machete wielding psycho at the start, and festivities of the resort are soon hijacked with more bodies – including the human PacMan maze, Pete’s head of security taking on the killer (see Laughter Lines), and the best gag, a fleeing employee attempting to speed away in a golf cart that the killer out-walks.

The killer instructs the staff to carry on as normal if they want to stay alive, prompting their investigations to occur off the record. Lars and Jenny do most of the footwork, while divemaster Juan avoids the affections of slightly-unhinged guest Penelope (“Peena-loap”), and the group try to work out how the murders relate to Pete’s music of yore.

The film was so limited in its release that I never got to see the theatrical cut, which ran 103 minutes. The unrated DVD version does go on too long and begins to drag as the BL gang milk their own jokes at the expense of giving their characters any depth. The film somewhat bows under the weight of the straight-bloke humor, complemented by requisite nudity, and none of the [few] female characters are written much comedic to do or say.

Why it ultimately failed is anyone’s guess. Something doesn’t work, but it’s not particularly easy to identify what – it just feels like it belongs to another time and place.