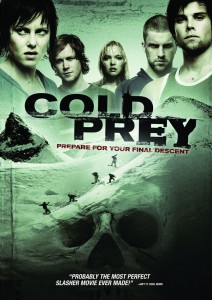 Hands up in da air for a Final Girl Filmclub entry.

Fans of Friday the 13th have long wanted an episode set in the snow. To date, Cold Prey is the closest any of us are going to get. And I say this as a long time Jason advocate… Cold Prey would probably still be better.

Seems as if in the wake of the Scream generation, European slasher films are where it’s at. Them toyed with the concept of uninvited guests long before The Strangers; Haute Tension lived up to its name; and Norwegian export Cold Prey not only packs in more tension than its French counterpart but unfolds as possibly the best slasher film in a long, long time. Combined with its equally well-crafted sequel, this is one franchise to be reckoned with. Although reports of the yet-to-be-released-internationally prequel, Cold Prey III, paint a picture of inability to leave well enough alone. Apparently, it sucks.

EDIT: I’ve since seen it, it doesn’t suck after all.

Never mind, it can’t change the fact that Cold Prey is a sensationally well made film, constructed out of a thousand cliches but using them wisely rather than retreading old ground and falling into a pit of topless babes going off to check on weird noises and dialogue no deeper than “oh my God, Todd looks soooooo hot!” Beautifying its simple story with a good eye for what looks scary and an evident lack of spoon-feeding the audience, it perfectly avoids the kind of executive meddling that has plagued way too many bigger budget American releases of the test-audience era.

Five young friends – horndogs Mikal and Ingunn, cutesy couple Eirik and Jannicke, and singleton Morten Tobias – drive out to a desolate frozen landscape for a day of snowboarding, which is soon cut short when Morten Tobias breaks his leg and they end up seeking shelter in a long-abandoned ski-lodge.

They bed in, stoke up a fire and the generator, get loaded on booze and get wasted by the hulking pick-axe toting psycho who resides there.

Cold Prey adopts the kind of slow burn approach often preferred in European horror. Little horrific happens for the first half, we simply spend time with the group, who have a few unspoken issues between them, most notably, sweet natured dork Morten Tobias’ unrequited love for Jannicke. The debut murder, some 40 minutes in, is set up just like something out of a Jason movie and remains undiscovered until the next morning, after Eirik opts to trek back to the car, leaving the other three alone at Hotel Creepshow.

Meanwhile, Jannicke and Mikal come across a room filled with ‘abandoned’ ski apparel, jewellery and keys, echoing that creepy cabin scene in Wrong Turn. Spooked, they decide to actively look for their friend who hasn’t been seen all morning and when they realise the extent of their dilemma they barricade themselves in a room until Eirik returns. Of course, we already know he’s been incapacitated by the nutter, who looks like he’s just hiked in from Lapland. Maybe he has. Maybe he’s Santa and they’ve all been bad.

The Friday-meets-Shredder outlay is soon cranked into overdrive as attempts to raise help are repeatedly thwarted by the killer until only Jannicke is left to battle him, culminating in a scene reminiscent of something I saw in Hostel of all things, but used to better edge-of-your-seat effect here. Despite the formula, the fact it comes from foreign shores leaves a gap in your expectation – the first time I saw the film I found it positively nerve-shredding.

All in all, while there’s not much to say about clever plotting elements in this otherwise standard slasher flick, Cold Prey undoubtedly benefits from believable and – gasp! – likeable characters, none of whom ‘have it coming to them’, their complicated personal motivations and the unrelenting cloud of bleakness that hangs over proceedings, ever threatening to shower things in sticky blood.

Director Uthaug’s vision was that the true horror was found in the helplessness of the situation and the killer was just a conduit for converting the underlying brood to a more accessible legion of terror. It works.

The byproduct of this is that we don’t really know what drives the killer. It’s hinted at and even shown in brief flashbacks towards the end but it makes little sense. It’s left up to you to decide rather than rammed down your throat.

Low-concept, high-art stalk n’ slash with a fond recollection of what actually made the hey-day films so good. Impressively, all cast members were brought back for roles in the 2008 sequel, which I frankly didn’t have time to fawn over so will follow some time soon.