Murder in a tower block is wrong on so many levels 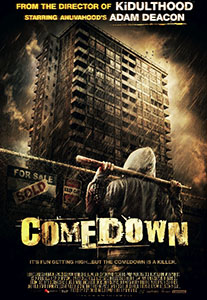 “It’s fun getting high… but the comedown is a killer.”

Supposed demographic synopsis: Dis is da story, yeah? In South LDN, some bros from a crew is arksed to put a radio antenna at da top of da abandoned Mercy Point tower block. But da fing iz dat there is a psycho livin’ in da flatz and he killz dem one ba one innit.

Rest of society: In South London, six “friends” are asked to place a radio antenna at the top of the abandoned Mercy Point tower block. However, their plans to party are scuppered by the homicidal intervention of a psychotic resident who begins doing them in one by one.

British ‘urban’ posturing was always going to leak into the horror genre by osmosis eventually. Demons Never Die (which featured leading man here, Anderson), made a year before this, flirted with such characters, mixing them into the blend of some suicidal-but-then-not-quite college teens. And Tulisa from N-Dubz. Innit. 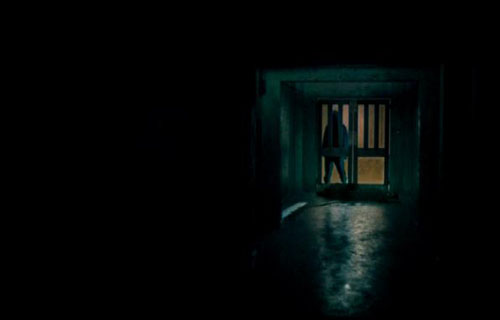 Comedown is more or less the UK equivalent of films like Cutthroat Alley, Urban Massacre, and all those killer clowns-in-da-hood DVD releases that came out a while back, and is directed by Kidulthood helmer Huda. Set in a grimy, rat-infested block of flats with six leads who are supposed to be friends but largely appear to detest one another. If you have no experience with this kind of lifestyle, it just looks like a parade of vulgar stereotypes who can’t get through a sentence without an expletive.

In that sense, it should be fun to watch them laid to waste by a killer with a predilection for powertool-themed killing, including an icky nail-gun to the eyeball. Other victims are torched, dissected, and thrown headfirst down garbage chutes. Mucho arguing grates in the first act, accompanied by a lot of walking up and down dim corridors, which recalls cheapo early slasher flick The Dorm That Dripped Blood, which was padded with reams of the same ‘action’.

That said, a couple of the teens do become slightly more bearable once they get scared. The aggressive one who says ‘fuck’ a lot is done in early, leaving the slightly bland leading couple (consisting of ex-con-going-straight guy and his newly pregnant girlfriend), a couple of sheep, and gentle giant Col (Duane Henry – easily the most interesting) to find ways to split up.

The loon also turns out to be alumnus from the Jigsaw School of Improvised Death Traps: He boxes the kids in to the upper floors by welding a door over the elevator ground floor exit and wire mesh over the stairwells and later traps victims in a room behind a steel door and pipes in smoke.

Things eventually culminate all too quickly and fizzle out a little disappointingly. The killer’s motive seems to be no more complex than his love for pigeons and the cut n’ dried hero-is-blamed ‘twist’ feels ridiculously crowbarred in given the age of DNA testing we live in. 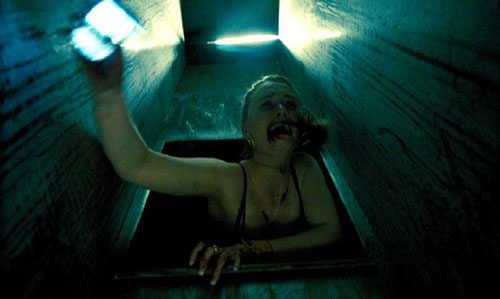 Ultimately decent fare that gets better once the stalk and slashing begins but leans too heavily on ghetto cliches and can’t steer its way around some of the slasher movie necessities, features mere seconds of dreadful cheap looking CG work (you can’t miss it) and squanders some of the grubby, dirty, this-is-also-social-horror mechanics operating. Listen for a couple of actors compromising their “innit” accents as their dulcet tones seep through. Could do better, could do worse.

Blurbs-of-interest: Adam Deacon was in Wilderness; Geoff Bell was in Tormented and Botched; Gemma Leah Devereux from Stitches, plays one of the nurses (the one whose face we don’t even see!)