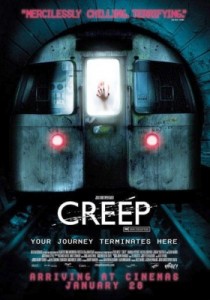 Ahh…London Underground. Cancelled trains, bizarre aromas (I once saw a guy attempting to piss through the window into the gap between carriages), tube mice, people cramming themselves in like sardines and sub-human psycho killers. On reflection, I think I’d rather deal with the latter.

Chris Smith’s gritty creature-feature-cum-slasher kicks off with a relatively nightmarish concept: London it-girl Kate (Potente) rushes from a late night party to see if she can track down George Clooney, who is rumoured to be somewhere close by. A moment’s resting of her eyes and Kate wakes up on a deserted platform having missed the last train of the night. Worse still, she’s now locked in the station.

When an empty train does turn up, Kate hops on and is almost immediately plunged into darkness and then attacked by a sleazy acquaintance of hers, Guy (the excellent Sheffield). She is temporarily rescued by the intervention of an unseen figure who drags Guy away and (unbeknownst to her) has also murdered the train driver.

From this point, the film turns into a series of thwarted escape attempts. Kate purchases the assistance of a homeless couple who live in a ‘rabbit warren’ of tunnels and she finally joins forces with captive sanitation worker George (Blackwood). The two pool their resources and strike back against the killer, a dim-dwelling troglodyte with the super-scary name of…Craig, who is the implied product of some dodgy secret science experiment that was taking place under the station.

The inferences surrounding the killer’s origins dampen the grisly ambience and subtract much of his initial menace but Smith liberally dishes out the grue when required and really puts Kate through the grinder, having her crawl around within inches of rats and swimming through sewage, ending with a chucklesome note when she finally makes it back to safety.

Creep maybe indebted to the likes of Deathline with echoes of Mimic, but comes into its own in terms of its unpleasant nature and classic Brit-grit. Unfortunately, the premise does not afford an 85 minute film, so much as a segment in an anthology. The mission statement was to do the same for the tube as Psycho did for showers and, thanks to keying in on some of those trapped in an endless maze nightmare motifs, said mission is at the very least part accomplished.