Where Tin Tin fears to tread 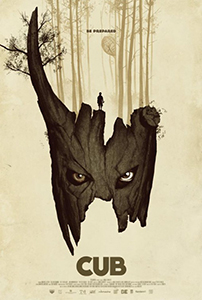 The surface of this crowd-funded Belgian campers-in-the-woods horror may scream Friday the 13th at the top of its lungs, but the comparable text pretty much ends there. Europe has kicked ass creating quality slasher films for some time now, subverting standardized clichés and presenting things in a divertingly multicultural light.

Disappointingly, Cub doesn’t quite live up to the standards of, say, Haute Tension or Cold Prey, and the viewing arc followed the saddening Starts-Amazing-and-Gradually-Loses-its-Way trajectory.

Still, there’s a lot to like in this tale of a pack of boy scouts from Antwerp, their three pack leaders (including obligatory hot blonde girl, Jasmijn), whose jamboree into the wilderness plants them in the centre of a nightmare, when their nominated site is unavailable to them, thanks to a couple of jerks with a quad-buggy, and they have to go further into the creepy woods. 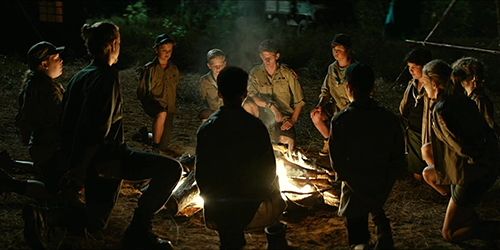 An exchange with a rotund cop informs us that a nearby bus factory closed down, suicides followed, and the locals are superstitious of the woods. Add to this the legend of Kai, the Werewolf Boy told by the Akela, and suggestible, possibly-traumatised outcast Sam eats it up.

Of course, the legend is true. Sort of. A wood-masked feral child is indeed lurking, stealing things from the camp, and a handful of murders ensue: The fat cop vanishes, and one of the buggy-jerks runs into a Goonies-style trap that ultimately pins a beehive into his torso and his torso into a tree. Cool.

The final third of the film gradually deteriorates as the tidbits we’ve been thrown about what’s in the woods is kept too ambiguous to comprehend, and a twist that can be seen coming through the trees some way off, recalling the rather stupid sudden-change-of-allegiance resolution in Texas Chainsaw 3D.

But the film is particularly nicely shot, well acted, and has plenty of neat moments, with demises by rustic sub-Saw traps, and the balls to go after the boy scouts, which most films would shy away from, but it never seems to really reach its full potential, giving away a particularly decent moment in the prologue that should’ve been saved to the end.

For a change from the usual cowgirl slasher conventions, Cub is a worthwhile one-time venture.

tagged with children are evil, Euro-horror, Friday the 13th, slasher