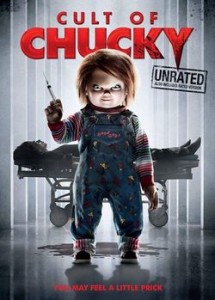 “You may feel a little prick.”

“…The look on my victim’s face when they realise in that final moment that it’s all really happening: A children’s toy is actually beating them to death with a yardstick.”

Credit where credit’s due – the Child’s Play series has done an impressive job when it comes to continuity, more or less keeping on top of film-to-film plot lines for almost thirty years and seven movies. To that end, rather huge spoilers are necessary to ‘splain Cult of Chucky…

Four years after the events in Curse of, original hero Andy Barclay – now mid-30s – has kept Chucky’s living head in a safe at home, and ritually tortures it. Nica Pierce, meanwhile, has been locked up in an institution and convinced by her shrink that she was the one responsible for the murders of her family. 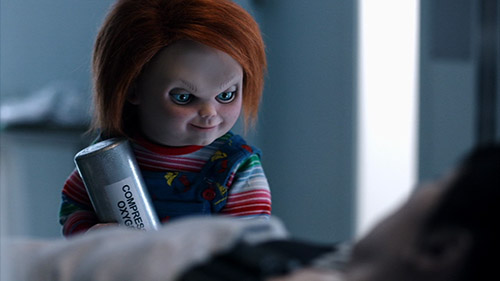 Said shrink decides to move Nica to an isolated lower security clinic now that she no longer blames it all on a possessed Good Guy Doll, going so far as to bring in such a doll to a group session. Nica is fine with it, and the doll is summarily adopted by fellow inmate Madeleine, who treats it like a real baby. Bitchy Claire doesn’t trust Nica; away-with-the-fairies Angela claims she received a phone call from Chucky, warning them all he’s coming back; and multiple-personality sufferer Malcolm flips between thinking he’s Mark Zuckerberg and Michael Phelps. 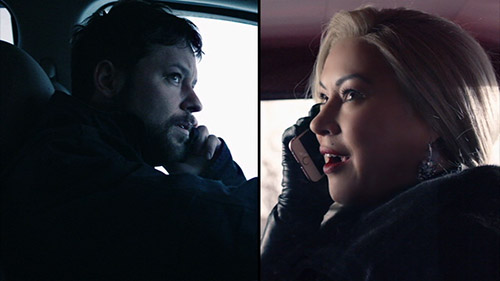 Nica receives a visit from Tiffany, who was somehow appointed guardian of her niece Alice, and breaks the news to her that Alice is dead. Broken, Nica attempts suicide but wakes in the morning to find her slashed wrist stitched up and a message for her left in blood. Meanwhile, another patient has successfully topped themselves, and the floodgates soon open in Nica’s memory.

Chucky stalks the halls, killing patients and staff by shattered glass and powerdrill, while Andy races to save the day, but has to get around Tiffany first.

The cult in Cult of Chucky is reached by a new voodoo curse that allows his spirit to possess multiple vessels at once, so ultimately we end up with this: 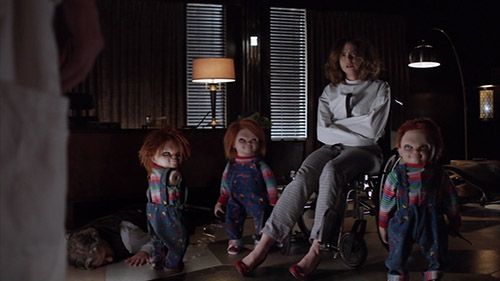 At the time Curse of was released, there was much hoopla over the back to being scary approach, which was the result of the remake falling through and the straight-to-DVD quasi-reboot coming instead. Though the film was sluggish in places due to its reduced budget, it succeeded in creating some atmosphere lacking in the Bride and Seed chapters.

Well, forget all that as Cult takes us back to the comic one-liners (albethem sometimes hilarious), wacky demises, Jennifer Tilly’s loony toon Tiffany back in the fray (but not centre stage), and a bit of a mess to try and untangle as things get weirder and weirder.

Mancini weaves things together well enough, leaving the door wide open for the eighth film – Christ knows what they’ll title it though – and as per Curse‘s post-credits gag, another face from pastures old puts in an appearance, giving the entire series a familial boost over its contemporaries. Fiona Dourif also gets to flex some reasonable acting muscle as well.

I’ve never been more than a casual fan of Chucky at best – he’s always entertaining and none of the instalments are crap, but I’d rank Cult in the lower echelons of the series, though it’s great to see the original creators still onboard and pushing things forward rather than phoning in a crummy remake or instalment-ignoring cash-grab as most of the others have done.

Blurb-of-interest: Adam Hurtig, who plays Malcolm, was also in Curse as Officer Stanton.