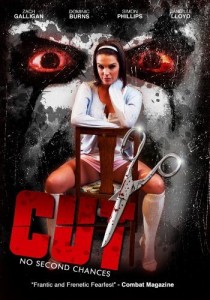 A cheap UK home invasion slasher film this might be, but Cut prides itself on being the first horror film shot in one continuous take. …Though if you scour the IMDb boards, there’s a claim it’s not. Nevertheless, trivia notes that it took 36 takes to get it right, when, you consider it’s an hour long production, that’s pretty impressive stuff.

Anyway, technical declarations aside, Cut begins amusingly enough with a babysitter (reality ‘star’ Lloyd) annoyed by her charge, who tells her the clown at the end of her bed keeps talking to her. When babysitter speaks with the mother, she says: “There is no lifesize clown doll at the end of the bed! Get out of the house!”

The TV goes off, this is just the film-within-a-film opener: Five people at a remote house banter, order pizza, and talk about a secret a bit… Noises from outside unnerve them, garden gnomes are shattered, car keys missing, phone out of use etc… And then a group of clown-faced psychos invade and begin killing them. 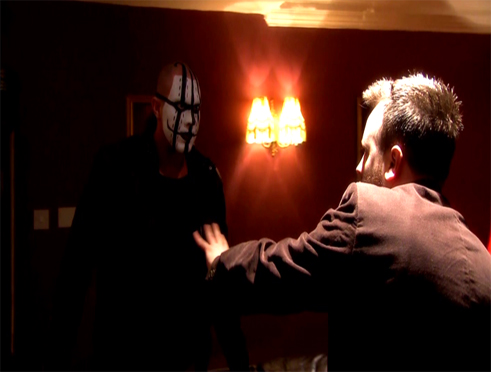 Gremlins‘ Zach Galligan leads the cast, who do okay with the one-take schtick, which, after 35 previous attempts, must’ve left them pretty damn bored of remembering their cues. But it works out alright.

Points are deducted for echoey sound and audio levels that prevented me finding out what the killers’ motive actually was… Someone screwed over someone else. That’s all I got.

Blurb-of-interest: Galligan was in the frankly far worse Hatchet III.

tagged with after they were famous, Rule Brittania!, slasher