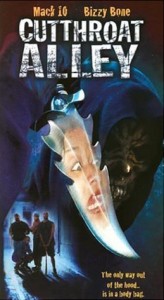 “The only way out of the hood…is in a body bag.”

Yo yo yo, it’s time to scream in da hood coz of da masked syko shanking everyone, yo!

About ten years ago, a film called Homecoming: The Revenge was planned to cash-in on the let’s-copy-Scream trend at its peak, it was declared that the only avenue left unexplored in the genre was the urban slasher flick. The film never appeared and seemed forgotten, leaving the gate to the meadow open and others soon found their way to the fresh pasture…

Ergo, it’s the knife for the members of a south-central LA ghetto crew as a cloaked, skull-masked killer slices and dices his way through the cast of this urban slasher landscape.

In the week before reformed gang member Reyes is to leave for college after turning his life around when his dad was murdered in a drive-by, the schizo pops up all over the neighbourhood to waste his ex-friends, making him everybody’s choice suspect. Obviously we know he’s not the killer and after a good seven or eight slayings, the true fiend is literally unmasked for long enough for him to spurt out a long winded exposition before the happy ending is thwarted by a twist that can be seen flying in all the way from the East Side.

Although it can boast a bit of surface polish and is way better than the similarly themed Urban Massacre - which lacked even the courtesy or script intellect to bother revealing who the killer was – writer-director Folsome can’t seem to let the ghetto clichés be and continually appears to forget it’s a slasher flick he’s making.

Racial issues crop up but aren’t forced down our throats, although anybody unfamiliar with the stereotypes of rap culture may find deciphering the dialogue a real challenge: barely a sentence passes without one of the gang-members referring to a ‘punk ass nigger’ within their clique or swearing out statements.

One of the cast members (I think the first victim) was once a member of Bone Thugs n’ Harmony. I have no idea what this means. The film received a horrendous rating on IMDb of 2.4; it’s not a good film but probably wasn’t quite that dismal. Or I just had no idea what was going on.

tagged with after they were famous, get your own ideas!, slasher, who finances this crap!?