Balboa vs. The Bad Man 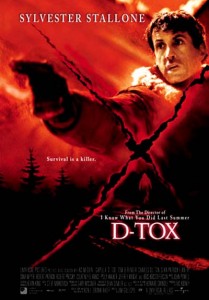 “Survival is a killer.”

A.k.a. Eye See You; The Outpost

Based on writer Swindle’s book Jitter Joint, D-Tox was shot in 1999 and then denied a release until the beginning of 2002, when it briefly appeared in a few choice locations. Seemingly a vehicle to relaunch the waning career of its star, there’s little that aids the cause.

Sly is Jake Malloy, a fed chasing a cop-killing maniac who also does away with girlfriend Meyer and evades capture yet again. Unable to cope with his loss, he is admitted to a remote Wyoming once-asylum-now-rehab-clinic for traumatised cops, which is run by ex-officer Kristofferson. Shortly after Malloy’s arrival, the “suicides” begin. Of course, the genre congnoscenti knows better and the cast eventually catch on and realise the cop-killer is among them. But which of the many characters is he?

While the identity of the loon isn’t glaringly obvious, the outcome is totally unimaginative and anti-climactic, indicative of the whole Hollywood ‘villains can’t be Americans’ issue.

Violence is toned down to an almost PG-level – the powerdrill in the eye murder sounds more interesting than it is – and most of the characters run around wearing thick winter Parkas reminiscent of those first seen in Urban Legend. Stallone moves away from his usual action persona with just enough charisma to carry off his role as the mourning drunk but the rest of the cast are strictly conveyor-belt fodder with the usual tragic histories that make them plausible suspects, which is a bit of a waste when you scan the impressive cast roster.

A good and not overdone finale wraps things up nicely but much of D-Tox is a waste of its great setting and it ends up as a second-gear action/slasher fusion that’s already been forgotten about.

Blurbs-of-interest: Jim Gillespie also directed I Know What You Did Last Summer and Venom; Dina Meyer was later in Crazy Eights.