Merry Christmas you people! As I spent the day recuperating from the previous night’s work party and its 3am finish, while I wrapped up gifts and sipped alka-seltzer, I caught up on a couple of slasher films from my stack of to-be-watched.

My “gift” to you, therefore, is a double review of these undisputed classics* 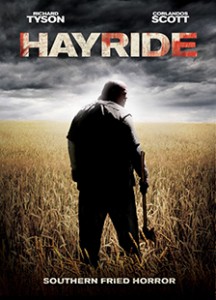 “Sometimes something can happen that is so traumatic that it becomes a legend,” says Captain Morgan (Richard Tyson) around a campfire concerning the local legend of a crazed farmer who went ape and killed a load of people in the unending search for his runaway daughter…

Morgan runs the popular annual Haunted Hayride attraction at his farm in Alabama, where college boy Steven returns along with girlfriend Amanda to help out. Meanwhile, a recently apprehended serial killer has escaped from police custody a few miles away and appears to be axing, impaling, and pitchforking his way through randoms and the police who accost him.

Of course, we all know things will culminate on Halloween night when the hayride goes into action, Morgan’s extensive cast of actors and crew will provide ample fodder, and Steven and Amanda will be thrust into the center of things. 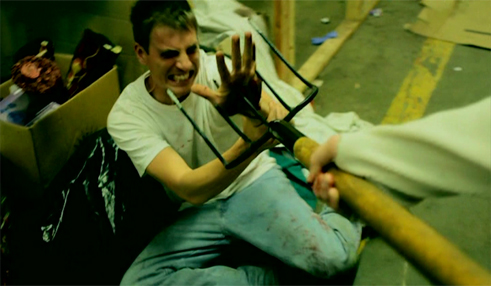 Well, this all happens in the usual way, although most of the killings are knife-in-the-back affairs or off camera completely, resulting in little bloodletting. When it is on screen, it’s a bit sloppy and amateurish to witness; a testament to Hayride as a whole unfortunately.

While the film is a bit of a dud in terms of production quality or originality, there are a couple of good scenes, namely when the killer attacks the hapless tourists with a chainsaw as they’re sat in the trailer, and a good performance from Ivy as Steven, channeling a youthful sounding (and looking) Matthew McConaughey (who is a Texan, I know). 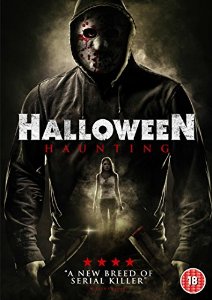 <<< UK browsers be forewarned of the misleading artwork (check out that font!), this hockey masked chap is not the killer. Although, the maniac’s choice of face-wear is a burlap sack, so not entirely unworthy of Jason…

Hayride finally unleashes a twist that, while I didn’t predict, isn’t so out of the blue to throw you off. It’s ultimately too little too late, but handled well enough to elevate the overall experience a notch. Though, once the killer is reprimanded, the survivors share a kiss and a joke (!) and are ambushed by another survivor who’s freaking out over the seventeen murders that have just occurred. They’re response: “Calm down, we know.”

I don’t quite remember the “two dozen murders” the deputy announces (several of the 23 noted occur in a flashback), but Pitchfork dude was quite handy at snapping necks and skewering cops, it’s totally possible. Hayride 2 has since followed. 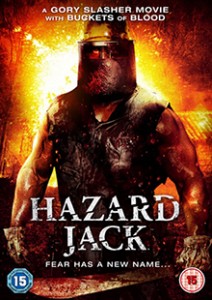 Pretty much every Stock Background Character there ever was crops up in this cheapo quickie, in which an unlikely group of college friends descend on an abandoned hospital for a game of paintball.

Residing there already is a hulking veteran with PTSD who is susceptible to violent outbursts (of course, this occurs in slasherdom after all, where all mental illnesses are fatal to those around said individuals), loses his job in construction, and delights in torturing a woman he’s abducted.

The young folk come, banter, strip off (yawn), pick teams in anticipation of a midnight kick-off, and so spend the remaining hours having sex with each other and getting murdered by Hazard Jack. So no paintball at all.

Victims include two chesty blonde chicks (Barbie and Muffy!), two jock jerks, a gay couple who repeatedly mention they’re respectively Latino and Jewish, the black guy who wants to be a director and Asian girlfriend who wants to be his starlet, the normal (dull) couple, a dweeby voiced geek, and his new friend, suspect-lezzer, Stella. Somewhat surprisingly, the booby, sexy, jerky ones who disrobed are done in first: Nailgunned, cleavered, drilled, but in spite of the declaration on the box, it’s not that gory. In fact, I don’t remember this even happening: 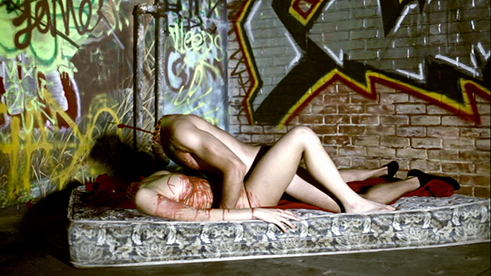 The film begins pandering towards the non-PC: the Latino gay chap is burned alive in a church, the lesbian is ‘cured’ by sex with a man, and is thus allowed to survive intact. The message is depressingly clear: Lesbianism isn’t real and can be undone; gay men should be gruesomely slain.

Things wrap up all too quickly and nearly, leaving a whopping four survivors – the only ones afforded any semblance of depth, whereas their friends are just obsessed with sex (bar the gays, they remain fully clothed at all times). A bit of gusto as they fight back at the end comes too late to save it.

I normally hate quippy killers in slasher films, but this could’ve done with a few witty military puns from the loon as he dispatched the victims. As he is, masked, slow, and invincible in a sub-Jason manner, there’s just not that much-needed hook.

Not the merriest Christmas by any stretch, but where Hayride might lack the claret and nudity of Hazard Jack, the latter is just a litany of lazy, annoying cliches. Still, I plan on never watching either again, so it doesn’t matter.

tagged with calendar carnage, Nu-di-ty, slasher, who finances this crap!?