I Best Be Knowin’ What Y’all Did Last Summer 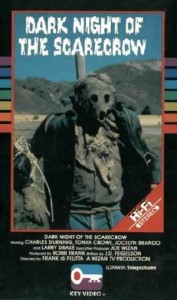 DARK NIGHT OF THE SCARECROW

Dire-logue: “The only official thing you ever done is lick stamps!”

TV movies used to be, y’know, good! No, really! Before the flux of home video in the 80s, more effort went into entertaining the masses via the faithful idiot box and so this slow burn horror from Halloween of 1981 is way more than your average SyFy CG-fest. I mean, hot damn, this film gave me the creeps.

Larry Drake is Bubba, a 36-year-old small town hick with the mental age of a little leaguer, who is best friends with ten-year-old Marylee. They make daisy chains in fields, sing songs, and skip around like all healthy, outdoorsy kids should, much to the annoyance of local mailman and wannabe big-fish Otis, who’s just waitin’ for that day when Bubba is caught undressing the little girl.

When Marylee is savaged by a neighbourhood dog and reported dead, everyone naturally assumes that Otis’s prediction has come true and he gathers a troupe of fat-ass friends who gather guns and bloodhounds and chase down poor Bubba, who hides inside his mama’s scarecrow, helpless when the quartet of rednecks spray him with bullets, literally seconds before a call comes in over the radio informing them that Marylee has regained consciousness and relayed her story of the dog. 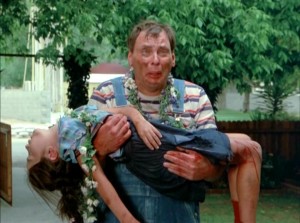 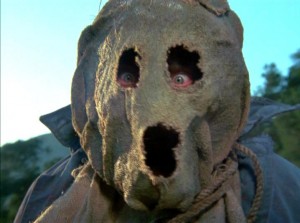 The men are put on trial and manage to gain an acquittal based on a fabricated story of self defense but, as Bubba’s grieving mama yells as she’s dragged from the courtroom, there are other kinds of justice in the world.

Dark Night of the Scarecrow, up until now, plays like a smalltown melodrama with themes of intolerance and blind hate – it’s not difficult to imagine people like this still existing today to hunt down outcasts based on race, creed or what gender of person they sleep with. There’s a sort of wicked satisfaction that they’re going to suffer for this that makes you want to lean in over a single candle flame, rub your hands together and cackle. 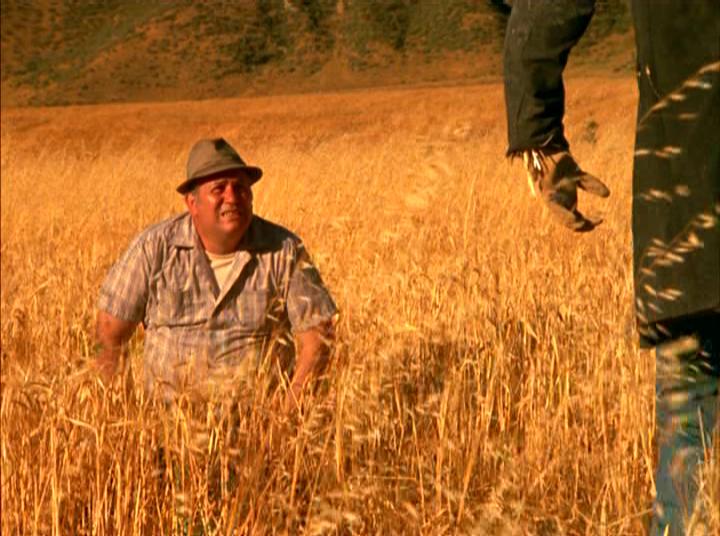 The film really gets its creep on at the halfway marker when the first of the guilty party notices a scarecrow, identical to Bubba, in his pasture. Accusations fly, Otis commands his disciples to stay away to avoid looking guilty, and later that evening an ‘accident’ occurs.

Paranoia of the standard ‘someone knows what we did’ subset ensues to great effect: the other men are immediately superstitious, convinced that the scarecrow is Bubba, back from the grave. Otis, on the other hand, is happy to blame anyone and everyone else: Bubba’s mama, the upset prosecutor, even little Marylee – who tells him, in no uncertain terms, that she knows what he did. Yes! Suck on that mailman ‘letter carrier’! 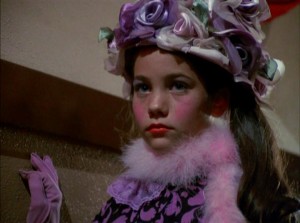 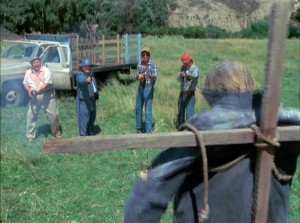 Weird things continue to happen, pushing an increasingly sweaty Otis to desperate measures in order to cover his own fat ass as his pals continue to drop dead in interesting ways. The scene with Philby is super-creepy and the ending… Argh! They really took some cues from Spielberg’s method of keeping the monster off camera and put them to good use here as Otis – naturally the last to believe – is made a believer.

To really review this film would be to ruin it to some degree so you’ll just have to see for yourself how basic common sense in observing what is scary rather than shocking can give a likely thought to be forgotten late nighter something of a cult following. The cast helps too: Durning makes a good, smirking villain and it’s interesting to see a young(er) Lane Smith (he played Chief White in The New Adventures of Superman) and Marlon Brando’s big sis plays Bubba’s protective mama. Drake doesn’t overplay the role of the mentally disabled Bubba either – there’s a heartbreaking fear in his eyes as Otis and his dinosaurs of the apocalypse ready themselves to open fire. 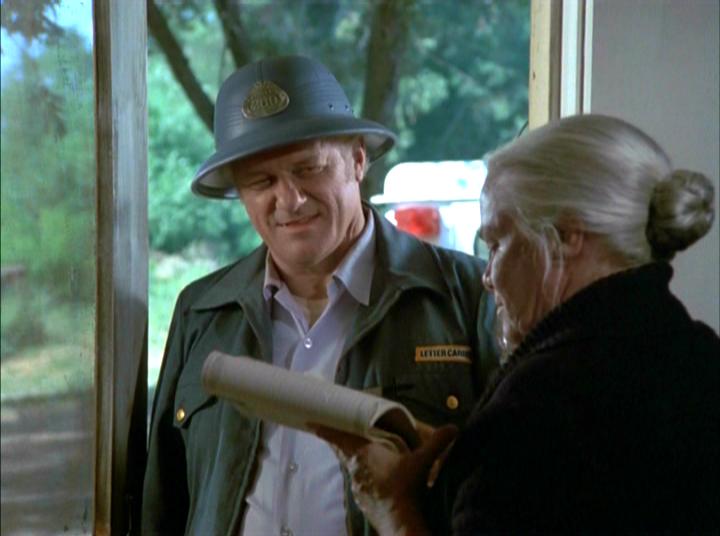 Charles Durning in… When the Mailman who Shot Your Son Calls

It’s a testament to the film’s quality that a ‘meagre’ TV film packs more unsettling content than a dozen big budget features with ten times the cash injection. Dark Night of the Scarecrow is a real product of its time: it would bore a modern audience to death were it new but for jaded oldies who thought everything good from the 80s had already been on DVD for a decade might find something nostalgically great here.

Don’t confuse it with the 1995 flick Night of the Scarecrow.

Blurbs-of-interest: Charles Durning was in both When a Stranger Calls and its sequel and also iMurders; Robert F. Lyons was in Pray for Morning; Larry Drake was Dr Giggles.

tagged with I know whatcha did!, slasher, star power, the 80s, TV