Funhouse. Without the fun part. 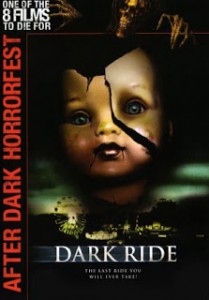 “The last ride you’ll ever take!”

Laughter Lines: “Why does it always have to be Jonah… or Jason… or Jedidiah? I mean why can’t it be Bob, or Gus, or even Chris?”

It’s The Funhouse revisited when six road-tripping college kids stop over at the abandoned ‘Dark Ride’ (to the rest of us: ghost train) of Asbury Park Pier, New Jersey (through obviously Santa Monica Pier), to take a look at the place where twin sisters were murdered in 1989 by the psychotic who happened to escape from his institution a fortnight earlier… Hilarity turns to horror as the masked maniac breaks up their party by knocking them off in textbook slasher movie style.

Dark Ride was one of the ‘After Dark Horrorfest’ titles, and so gained a limited theatrical release. Quite why it was chosen for the festival of films ‘too intense’ remains a bit of a mystery as there’s very little here that hasn’t been seen or done on multiple previous occasions and with a bit more flair as well. While Craig Singer is a competent director and makes good use of visual effects and has some nice setups to toy with, the script is so paint-by-numbers that virtually nothing that happens is a surprise. 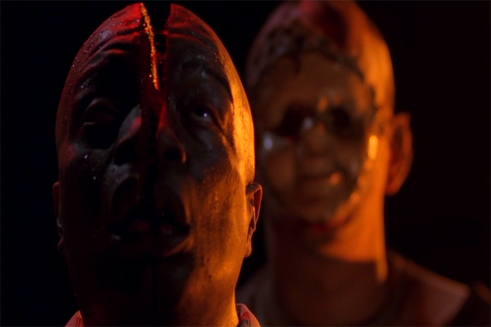 A major problem lies in the characters: Sigler (of The Sopranos) isn’t a particularly likeable heroine and her friends are nothing but a string of stereotypes who bitch and moan about everything with the exception of film-nerd Bill (Renna), who just doesn’t belong at all. The production team have evidently made a beeline for an authentic old-school feel with their film, but have overlooked the requirement for happy, bouncy teens the audience might care about seeing sliced and diced, rather than a bunch of snotty brats who don’t have a single nice thing to say to one another.

Another detracting factor is that, after the opening scare, it takes an hour for the massacre proper to kick off, but at least when it does it’s garnished with some grisly demises, including a sticky cranial split. The Jason-like killer, Jonah, also has one of the creepier masks in some time, but you can just smell that last-minute twist coming, especially as one particular character hasn’t been seen in a while…

How to rank it? Well, it’d be the better half of a double bill with the not dissimilar See No Evil.