Lights on, nobody home 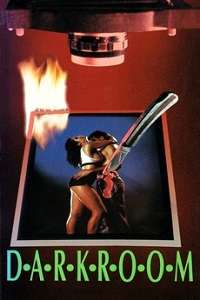 College girl Janet returns home to her rural family home for a break – joining mom, grandpa, her sister and her cousins, who live with the family after a suspicious fire killed their parents along with Janet’s photographer father some years back. His darkroom still exists in the basement of their remote house. Someone in the cast is sneakily taking photos of people before killing them, occasionally wearing a creepy worn yellow rainmack while doing so.

When Janet’s boyfriend Steve turns up, mom asks them to go look for AWOL sister Paula, who has shacked up in a trailer with a temperamental local who, it seems, has killed her, and attacks anybody else who crosses his path. Lots of running back and forth ensues, with all vehicles unavailable or immobilised, the phone out, and the nearest neighbours ten miles away… Ideal working conditions for your common or garden slasher killer.

A nice credits sequence and some good photography make Darkroom look better than expected, though for a Nico Mastorakis production, most of the kills are tame or occur off camera entirely; the killer’s motive is hazy and seems almost shoehorned in in place of something that would really wrap things up satisfactorily.

An okay 86 minutes but you might get more out of developing some old photographs.

Blurb-of-interest: Aarin Teich was in Bloodspell.