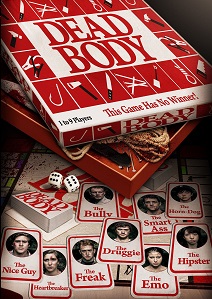 “This game has no winner!”

Dominic invites his old schoolmate Ilsa to a wooded cabin for a little reunion before they head off to college, only she brings her boyfriend Dwayne, and then Sara, Eli, Marcus, and Rumor all turn up as well. Plus there are two random Japanese exchange students staying.

They drink, dance, and decide to play a round or two of Dead Body, which is kinda like hide and seek with an allotted ‘murderer’. To the surprise of nobody but the cast, someone has taken it too far and real killings begin to occur. The group throw around accusations galore, trap each other in rooms, run off into the woods, split up, die some more…

The killings are pretty tame and uninventive, but a couple of characters simmer with the notion that they may reveal an interesting facet about themselves, but the pot never boils over and we’re left with the pale stereotypes pointed out on the cover art.

The identity of the killer is ridiculously obvious, to the point where I hoped the film was going to hit me with a twist out of the left field, but it never came. The mask was pulled off and it was the person I pegged it as 26 minutes in. Bogus.