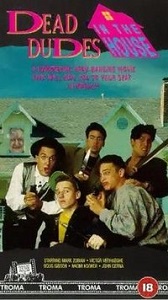 DEAD DUDES IN THE HOUSE

A.k.a. The House on Tombstone Hill; The Dead Come Home

“Where trespassing is a matter of life and death!”

Filmed as The Dead Come Home and then picked up by Troma and, I guess, re-branded as more of a parody than it actually is and given a whole new title.

Thus, ignore that cover art entirely and strap in for a very slow, very boring yarn of seven college age kids who rock up at an old abandoned house to fix it up and make the fatal error of taking a sledgehammer to a tombstone found in the garden, which unleashes the spirit of a crazy old woman with super strength and looks like Motherface from the ironically similarly titled Dude Bro Party Massacre III.

The house is possessed and locks everyone inside so the old lady can pick them off. But more than that, those who die return for a while as zombies who are also capable of killing the living to the extent where even their heinous wardrobe choices can’t save them. 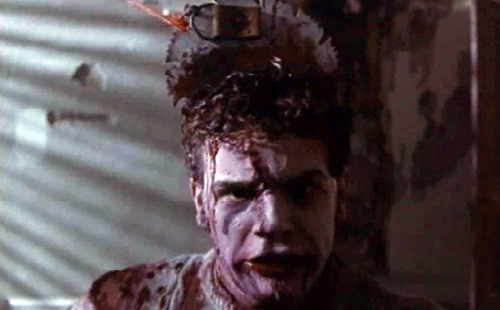 Within minutes, the film establishes an absolute asshole character who breaks the gravestone, demands beer, unapologetically smokes, and basically complains and yells about everything. Add to him is who I feared would be the final girl: A whiny, moany cow who is first to encounter a zombie, blame the old woman, and suddenly everyone else is happy to kill her without seeing any proof for their own eyes, but later recall events they weren’t even present for to justify the violence.

A couple of decent demises, such as the hands chopped off of a guy hanging from a window, and another chopped in two, there’s a fair bit of grue but the resolution was too dark to see much. It’s also one of the few slasher flicks to elect a final boy (for a while, two), which is always interesting. Too bad the 94 minutes feel more like 194.

tagged with gore o'clock, slasher, the 80s, who finances this crap!?