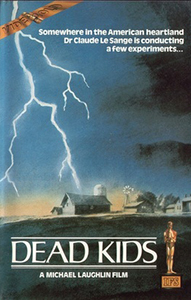 Laughter Lines: “Here are the files from the college: 135 overweight girls.”

Strange Behavior is probably the best known title for this New Zealandianianian production, but Dead Kids is just too good a name. It’s like the producers thought “why bother with a calendar date or some schmancy As Night Falls pretense… let’s just call it what it is!”

Anyway, this is anything but your average guy-with-a-weapon fare, although things begin with a teenager in a house when the power goes out, but it soon morphs into a sorta Frankenstein Meets Friday the 13th situation, as the local teen populace of Galesburg, Illinois (though clearly NZ) who have volunteered in a weird mind-control experiment, are programmed to kill various locals.

Why this is happening isn’t crystal (lake) clear, but from the trivial dialogue scenes, we can piece together just enough to implicate an eeeeeevil scientist who was thought to be dead, probably taking revenge on the most influential families in town (mayor, police chief etc). There are more characters than necessary, many of whom appear only for a couple of lines before never again contributing to the story but are considered (by the credits at least) to be the main players

There are still some neat scenes and a good, if obvious, twist. The blood flows like wine at a Strictly Come Dancing season premiere party for 40-something women, most notably when the neighbourhood babysitter-cum-busybody drops in to make a snack for an 11-year-old, whom she finds in the bathtub being carved up by a teenage girl. Kudos for the malice – not many films would have the stones to show that on screen.

Look out also for the cringe-tastic dance routine at the party, which rivals any of the dreadful moves that Jamie Lee Curtis and Casey Stevens donned in Prom Night.

A quirky, weird experience of a film, but one worth seeing either way.

tagged with children are evil, gore o'clock, slasher, the 80s