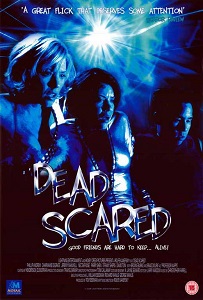 Laughter Lines: “You don’t understand, man! The book is evil!” / “And it will be punished – we’ll all take turns spanking it later, OK?”

On the surface, Dead Scared looks like just another cheap video flick that appeared in the post-Scream binge. So it comes as a pleasant surprise that the film manages to transcend its budgetary constrictions with a witty writing and sharp, sassy dialogue.

The fact that it doesn’t stick to the slasher rules like flypaper is also a plus, as it serves up a cut n’ shut plot reminiscent of both The Evil Dead and Hell Night: Five college pledges embark on a scavenger hunt set for them by senior members of their respective sorority/fraternity houses, which is to end with a night spent at an abandoned house where a murder occurred a zillion years earlier.

Too bad that two of them end up accidentally killing a creepy professor (Dourif) after they discover he’s into some dark rituals. Once gathered at the house, it transpired that he’s not so dead after all and his spirit possesses one of the pledges and sends them on a quest of gory carnage, with people being turned into mannequins or biting their own tongues off. 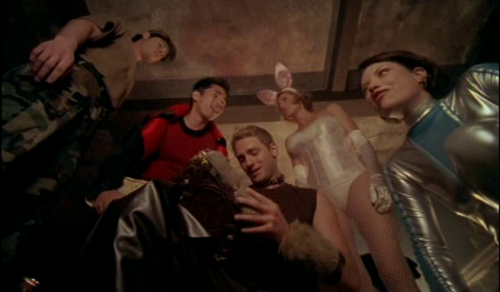 As the numbers dwindle, the final trio of teens are left to establish re-equilibrium. In a similar way to the previous year’s Detour (which also featured Shepis in a blink-and-you’ll-miss-her cameo), it’s the characters who initially appeared least likely to survive who emerge victorious, with Rose as a man-eater who pretends to be a bimbo to get the guy she wants where she wants him.

Although short on fresh ideas for this type of venture, creator Kanefsky inks some great moments and exchanges and the plucky cast turn in surprisingly good performances, with Dourif’s comic charm elevating his comparatively minimal screentime to be the most memorable.

Blurbs-of-interest: Dourif voiced Chucky in all original run Child’s Play outings plus the TV series, and was also in Trauma, Urban Legend, Chain Letter, and both of Rob Zombie’s Halloween re-do’s; Parry Shen was in all four Hatchet movies; Tiffany Shepis was also in Basement Jack, Bloody Murder 2, Home Sick, Scarecrow, and Victor Crowley; David Tom was in Stepfather III.