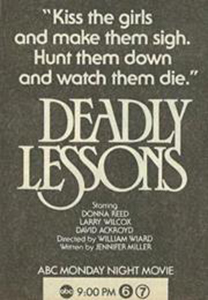 “Kiss the girls and make them sigh. Hunt them down and watch them die.”

Laughter Lines: “If we get caught we’re dead… Sorry, poor choice of words.”

The first words uttered tell us all we need to know: “I’ve never been to a boarding school before, but this is one of the best schools in the country and they’re giving me a free scholarship! I just hope the other girls like me!”

These come from Stephanie (Franklin) to her cab driver as they approach the prestigious Starkwater Hall prep, where she’s joining the summer session early along with a small group of other girls who need to buck up their ideas. 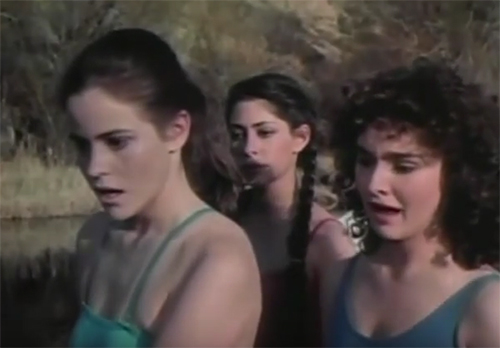 No sooner does Stephanie arrive, than one of bitchy girls is found drowned in the lake. Everyone says it’s an accident bar local detective Russ Kemper, who doesn’t take kindly to headmistress Miss Wade’s insistence that the school is not damaged by bad press.

Stephanie, meanwhile, begins to play detective, thanks in part to her obsession with a Clue-esque boardgame called Evidence. Suspects include the horse riding teacher, the stable boy (Paxton), other teachers, the requisite creepy handyman, plus all the girls who hated the victim, and victim No. 2…

There’s not a spot of blood to be seen in all of Deadly Lessons, it really is as if we’re watching Jessica Fletcher’s youthful memoirs for all the red herrings, questionable performances, and absence of violence. All that was missing was that judgmental shake of the head thing she did after the killer freely admitted how and why they did it – although in this case, the mystery is not so easy to solve.

Without a doubt, the primary appeal is in the cast, from Sheedy’s pre-Breakfast Club rich girl, to Nancy Cartwright’s (Bart!!) unwanted over-eater, though you wonder how many highlight it on their respective resumes. This could be shown on TV any Saturday afternoon and cause zero offense. An interesting one time affair, but not a class you’d want to repeat.

No home video release (beyond a German one under the name High School Killer) has surfaced, hence the significant lack of artwork.

tagged with before they were famous, death on campus, Friday the 13th, slasher, star power, the 80s