Can 1990 seriously be twenty years ago? I feel so old! Decrepit! Call me Grandpa Voorhees. OK, so no, time is time and we can’t change it etc etc…and I was only 11 when it turned from ’89 to ’90, leaving behind the funkiest decade.

Now we kiss goodbye to the 00’s (unless you’re a pedant who insists each new decade actually begins at the “01” year). A quick filter of an Excel spreadsheet informs me that I saw 225 slasher films shot between 2000 and 2009, so while most people do their ‘best of 2009′ lists, VeVo looks back at the best – and worst – of the last ten years. Take my hand, it could get self-referential!

Firstly, there were the SEQUELS to franchises from the 80s and 90s that just kept comin’ – or in some cases took forever…

The most successful slasher franchise of the era bowed out in 2000 with Neve Campbell, Courteney Cox and David Aquette finally shutting the door on years of being stalked by Ghostface in Scream 3. Although rumours abound of a resurgence in 2010, nothing is yet set in stone.

Also out for more was Urban Legends: Final Cut, Halloween: Resurrection, Seed of Chucky and overdue returns for Jason and Freddy in, respectively, Jason X and Freddy vs. Jason, which looked like it was going to usher in some miserable years of cut-n-shut head-to-headers, thankfully, in spite of its massive success, nobody saw fit to copy it.

We waited approximately five years for Return to

Sleepaway Camp to get it’s DVD release and then all moaned that it wasn’t very good; and as the DVD box-set extravaganza began, studios dished up cheapo sequels to fill out cardboard space, among them Urban Legends: Bloody Mary and I’ll Always Know What You Did Last Summer, which proved that it is indeed possible to fuck a movie franchise up the arse and leave it in a violated mess in the corner.

The 00’s was also the decade of REALITY TV, kept afloat mostly (in the UK at least) by Big Brother, which stranded a dozen or so morons in a house without a psychopathic killer! Before long, slasher movie makers jumped on the bandwagon. Halloween: Resurrection came late to the party, cheapo exploitation fare such as Voyeur.com and Cruel World went for the lowest common denominator while arty stuff such as My Little Eye was so depressing that I’d rather have been forced to watch the shows proper than sit through it again…

Arguably – and this does spark “debate” (a.k.a. childish name-calling and tantrums) – the biggest thing to happen within the genre came around about 2003.

Surely it started out as something relatively innocent…:

Harried Writer: “I really don’t think we can write another one of these. What else is there to do?”

Harried Writer: “That’s not a word.” 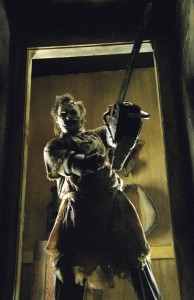 And thus it came to pass. The Texas Chainsaw Massacre was remadeimagined, soon after generating a sequel of its own, reinvigorating the losses made by the admittedly patchy 80s and 90s ventures and opening the floodgates for execs everywhere the pillage the catalogue of “people only remember the title”-style horror films.

I’ll admit that some worked out fine; I, for one, enjoyed the TCM redux and also Friday the 13th. The rest were made up of agreeable distractions that were fine so long as you didn’t compare them to their source material (Black Christmas, Sorority Row, House of Wax), some that slipped under the radar and others that should just burn in hell for all eternity. However you look at it, we were left with this: 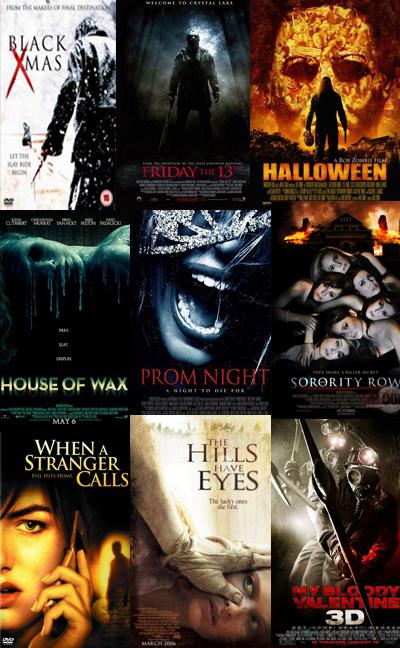 The main ‘problem’ with a lot of these remakes – aside from the evidential lack of imagination infecting the industry – is that, in most cases, the nihilistic days of the early 80s horror scene are over, and in their place came a bunch of anodyne, inoffensive PG-13 rated films that barely register on the horror scale.

From its original instalment in 2004, the Saw franchise has, like Friday the 13th back in the 80s, seen a new sequel every year. As of 2009, we’re up to Saw VI and a seventh appears on IMDb already for Halloween 2010. Not really slasher flicks, Saw and Hostel (plus its sequel), were cleverly plotted horror films with a lot of grue, death death death and crazy loons killing people in creative ways, often placing American tourists elsewhere on the globe where the locals have a few screws loose.

The Hills Have Eyes remake (plus its sequel – Dear God, how often will I have to type that?) flirted also in this darker than dark arena of extensive violence; Uwe Boll’s naff Seed and the Brazil-trip-gone-wrong saga Turistas and Wolf Creek were the closest relatives of the slasher film.

Extreme violence isn’t my thing; although some of these films were well plotted, nicely made yadda yadda, the public fascination with their forbidden horrors appeal seemed to have waned by the close of the decade.

In Part 2 (next week, alright?) – the rise of the genre in the Far East and VeVo’s best and worst slasher flicks of the decade.

tagged with Friday the 13th, get your own ideas!, gore o'clock, Halloween, me me me!, remake, sequel city, slasher, sorority, yo! Hollywood