Christmas is coming: time for joy and laughter and, if you’re me, horror films of death. But how to mix these things together and please the visiting familials? Oh yeah, the sub-sub-genre of the slasher parody.

Parody films are very hit and miss at the best of times (Airplane! excluded). And as slasher films largely unconciously parody themselves in the ornate crudness of their very situations, what’s left to take the piss out of? 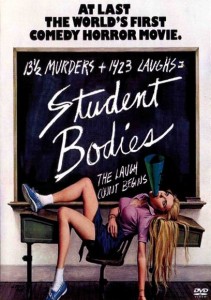 The hilarious story: sexy teen couples at Lamab High are being laid to waste by a commentating maniac in squelchy boots. Can super-goody-two-shoes heroine Toby solve the mystery?

Unfunny stuff: pretty much everything else; the stupid twist-within-a-dream ending where they evidently took the audience to have a combined IQ of 19. 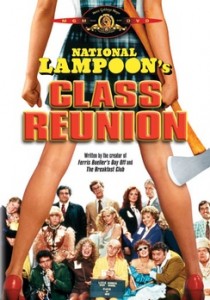 The hilarious story: the class of ’72 from Lizzie Borden High gather for their deca-reunion where the kid they played a Terror Train-type prank on is now a paper bag-masked psycho killer. Of the cast of twenty-five odd folks, he kills four. Four.

Funny stuff: Anne Ramsay is present as the school cook and there’s a recurring demonic possession joke that made my lip curl…

Unfunny stuff: there’s some real shit gags in this, it’s no wonder nobody’s ever heard of this one, National Lampoon tag or not! The lead guy was a wanker who I waiting to see die in a myriad of horrible griz. Romy & Michele’s High School Reunion is way better. 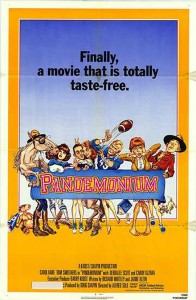 The hilarious story: Bambi’s cheerleader academy was shut down after a rash of cheericides in the 60s, including the ultimate shish-ka-bobbed spirit squad. Having decided to re-open “the old camp,” Bambi finds that her new class of students (three of them guys!) are being tormented by another cheericidal manaic! Only telekinetic cheer-wannabe Candy has the smarts (and power) to stop the madness…

Funny stuff: the cheerleaders are called Candy, Sandy, Mandy, Andy, Randy and Glenn. Glenn Dandy. The Carrie poking is amusing and the cast, featuring Carol Kane, Judge Reinhold, Debralee Scott, pre-PeeWee Paul Reubens and Eve Arden is great. It was originally to be called Thursday the 12th until Saturday the 14th came along but had sod all to do with Camp Crystal Lake.

Unfunny stuff: with any of-the-moment parody, it’s going to be dated as soon as it’s finished, so lots of it has little relevance 27 years down the line but, on the whole, Pandemonium holds up pretty well. “If I can’t be a cheerleader…no one can be a cheerleader!”

VV’s amusedness: 71% – “it was like this one time, at band cheerleader camp and it was so funny.” 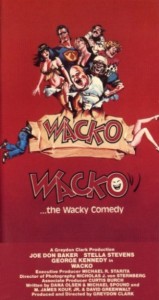 The hilarious story: 13 years after seeing her older sister sliced and diced by the Halloween Prom Night Lawnmower Killer of Hitchcock High, virginal Mary Graves finds herself stalked by the very same killer as her own Halloween Prom approaches.

Funny stuff: One of the best lines in slasherdom when Mary’s mother receives a letter from the killer: “it’s Halloween, it’s Prom Night, there’s a psycho on the loose so don’t open the door, don’t answer the phone, don’t look in the attic, don’t go to the bathroom, don’t go into the ocean and don’t go into space ‘cos no one can hear you scream!”

Unfunny stuff: as with most of these things, the film spends too long trying to be relevant to the time period, which takes away from the slashing. ‘Wacky’ teachers and parents disappear and reappear frequently. George Kennedy getting a pie in the face for aping Hitchcock is the final ‘hilarious’ twist. 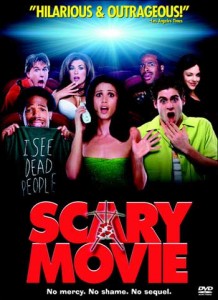 The hilarious story: Six high school friends are stalked and tormented by a cloaked fiend who might just be the fisherman they ran over last Halloween, while a nosey reporter investigates the spree of killings that begins.

Funny stuff: if you watch this right after watching Scream, it’s funny. Any other time and you’re likely to tilt your head and squint your eyes trying to work out if you should laugh or not.  The Matrix and Blair Witch Project take-offs were funny at the time but the recreation of “the Jada Pinkett moment” from Scream 2 is the best part. The working title Scream if You Know What I Did Last Halloween was far better.

Unfunny stuff: the film wanes like a dying plant, eventually flopping flaccidly like a disappointing bedtime partner. Eww. And Marlon Wayans as Shorty – what the fuck is the point of his character? Talk about family favours!

I went on a date to see Scary Movie 2. We never spoke again. 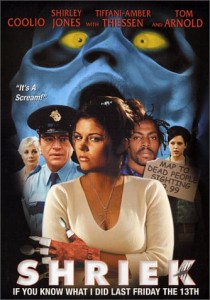 The hilarious story: almost exactly the same as Scary Movie (with which this film was the competition but took too long to complete): the teens of – groan - Bulimia High are stalked by a killer who knows what they did last summer etc… Only here, the killer is so inept that the victims die from bee stings and coronaries before he can get his hands on them.

Funny stuff: the ‘Pop Up Video’ part near the end is actually funny. Coolio dies. 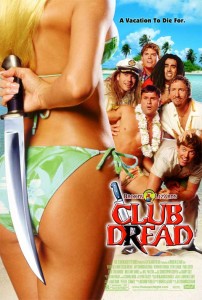 The hilarious story: at Coconut Pete’s Costa Rican island resort (a sort of 18-30’s thing), a machete-toting killer is offing staff members, forcing those remaining to act ‘normally’. Is it the island’s mythical ‘Machete Phil?’

Funny stuff: Bill Paxton is great as Coconut Pete and there’s some good stalking and slashing sequences, the best of which involves a victim trying to get away in a golf buggy, eventually out-walked by the killer.

Unfunny stuff: The Broken Lizard comedy troupe evidently think they’re a lot funnier than they actually are, director Jay Chandrasekhar as queeny tennis boach Puttman is the best and Kevin Heffernan’s new-boy masseur makes a likeable hero but the others are just plain annoying. Clocking in at a whopping 113 minutes (the DVD version), Club Dread drags out some of its lame gags to the bitter end.

VICTOR: It can only be Pandemonium, the film with the crappest title but the least amount of crap gags.

tagged with before they were famous, death on campus, Face off, Friday the 13th, get your own ideas!, Halloween, rip-off central, slasher, star power, what the hell!?