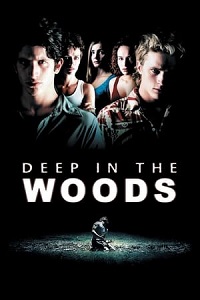 DEEP IN THE WOODS

Laughter Lines: “It’s not my fault those bitches got killed!”

Promoted in its native France as a contemporary to Scream, this lushly produced twist on Little Red Riding Hood (titled Promenons-nous dance les bois – A Stroll in the Woods) concerns five young actors who are hired by Baron de Fersen to perform their offbeat version of said fairytale to him and his autistic grandson, Nicolas, at their manor in the forest. Deep in the forest.

One play performance, some weird dreams and gratuitous amounts of semi-tasteful nudity later, somebody dons the creepy-ass wolf costume from the play and goes after the thespians one by one. Characters number among them lesbian lovers (…le sigh), a pervert groundskeeper who cuts up a wild animal in the film’s grossest sequence, and a mysterious policeman who turns up out of the blue, claiming to be looking for an AWOL rapist.

Directed with the kind of expert visual flair the French are famed for, the style here leaves many genre directors far behind, flawed only by some weak characters and a killer who can barely scrape the remnants of a motive together. Sharper scripting and a little more clarity would’ve been welcome (though perhaps the latter was lost in translation), but perhaps the misty-eyed dream-like quality of the whole thing is kind of its point.