Gianna and the Giallo 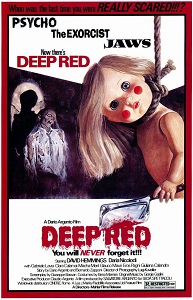 “You will never forget it.”

Laughter Lines: “It’s always a maniac and they never catch them!”

I saw Deep Red for the first time about eight years ago but curiously made no notes whatsoever and couldn’t remember a whole lot beyond the twist with the ‘painting’, the mechanical doll, and not knowing if Gianna died or not. It’s likely I watched a cropped down version, because the one I just rented seemed a whole lot longer and had several cut-ins which were never dubbed into English (despite the actors’ lips obviously speaking in it).

Anyway, serving as the template for Dario Argento’s move from whodunits into his more slasher movie-esque era, the accepted giallo ingredients are all present and accounted for: An outsider, a black-gloved mystery killer, slow moving scenes that fragment the locus so we don’t know where the fiend might leap from any second, psychics, a score like someone had a seizure at the piano… It’s all here! Yay!

In this case, David Hemmings is Marcus Daly, a jazz pianist/lecturer living in Italy (whether or not it’s Turin where the film was shot I don’t know – they mentioned Rome?) who, one night, witnesses the brutal murder of his neighbour, Lithuanian medium Helga Ulmann who, earlier, had ‘tapped in’ to the thoughts of a vengeful killer during a lecture on telepathy, saying she knew who it was and that she would write out her observations and hand them over to the police.

Marc finds himself teamed up with Lois Laney reporter Gianna (longterm Argento fixture Nicolodi) to try and crack the case ahead of the seemingly clueless cops – who tell the press their eyewitness can ID the killer, which goes out on the evening news. There’s a tinge of romance between the carefree Gianna and uptight Marc and the re-added scenes largely cover their partnership, involving a recurring gag with a crapped out Fiat 500. After an hour, the killer returns to eliminate a writer who knows about a past crime at a house we briefly saw during the credits as someone was being stabbed to death before the weapon fell at the feet of a child, while a kid’s ‘la la la’ ditty plays. This tune comes up several times and, while not as much of a brain intrusion as Baby Shark, anything by Ed Sheeran, or the Halloween III Silver Shamrock commercial, it does get a little irritating.

With the killer seemingly one step ahead, Marc finds the creepy old mansion and uncovers some more clues. This scene is strangely long – really long – and it reminded me how impatient modern audiences have become. A part of it involves him chipping away at plaster to view a mural beneath it. In a new flick, this would be montaged down with cuts, but in Deep Red we witness the whole process, including him going off to find a piece of glass to hasten his pace.

In that sense, Deep Red, if re-edited, would probably clock in around 85 minutes there’s so much …waiting going on. But in other scenes it makes sense: The stalking of the interim victims – the writer and a professor – is expertly strung out to tease the audience. We know something bad is about to drop, but from where, and how badly? The mechanical doll shock is still absurdly creepy and weirdly irrelevant, yet remains the most memorable set piece.

Eventually, Marc figures out what he saw way back at the start with ‘the painting’ and the killer is revealed. “It was such a long time ago!” they caw for the flashback/exposition, before a very rapid fight ensues. The twist is neat though, can’t say otherwise and, while I’d probably not choose to donate two hours of my time to sitting through this for, hmm, another couple of decades, it shows that Argento was, even then, streets ahead of his contemporaries.

Blurbs-of-interest: Argento’s other slasher pics include Tenebrae, Opera, Phenomena, Trauma, and Sleepless; Nicolodi was in Tenebrae, Phenomena, and Opera; Gabriele Lavia was in Sleepless.