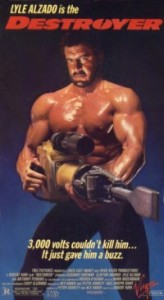 “You can’t kill what refuses to die.”

A.k.a. The Edison Effect; Shadow of Death

Dire-logue: “Hey, this is the 80s, doll, nudity is required of everyone!”

Not even the electric chair can stop serial killer Ivan Moser, whose botched execution coincides with a prison riot that ends with fifty deaths and the closure of the facility.

Eighteen months later, a film crew shooting a cheapo exploitation flick called Death House Dolls set up in the prison under the supervision of hack director Perkins, who tosses more than a few references to Psycho into the salad.

Meanwhile, stuntwoman Susan (Foreman, sporting a grim Pat Benatar do) keeps finding mysterious messages to her left in eerie areas of the prison that she thinks are from her scriptwriter boyfriend, Rohner. As it turns out, Moser (walking protein shake Alzado) is still very much alive – or ‘half alive’ if you listen to the obligatory oracle – and killing the cast and crew is now his favourite pastime.

There are plenty of decent laughs and sharp lines to lap up but the film doesn’t really know if it wants to be an acition movie or a horror movie and so we lost out when cliches from both genres are junkily fused together making the cast look a bit confused with the material.

Ex-football star-turned-actor Alzado (who died in 1992) is an efficient maniac and Lannie Garrett does a good turn as the difficult lead who needs the money. The plot flaws are eventually too obstructive to elevate this over three stars but it’s still worth a look, and seems to be quite the rarity now.

Listen out for the background song: Kiss My Stinky White Ass.

Unanswered questions: What happened to all the girls in the showers and why did they sink to ripping off the end ofSorority House Massacre?

Blurbs-of-interest: Perkins appeared in all 4 Psycho movies as Norman Bates; Foreman and Rohner were both in April Fool’s Day; Tobias Anderson was in Harvest of Fear.