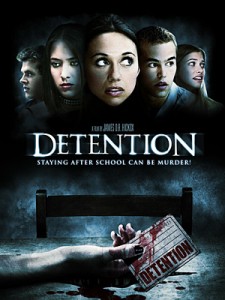 “Staying after school can be murder!”

Dire-logue: “Oh my God, they’re gonna find our skeletons in twenty years and make a cheesy mini-series about us.”

According to the IMDb, the opening weekend gross for this $2.15million budgeted flick was $190. No additional zeroes. One-hundred-and-ninety dollars. I hope for the sake of everyone involved that it played in one tiny movie house for one showing on a rainy Tuesday morning.

Actually, why should I care? It’s not like Detention has anything going for it. Starting in 1976, a group of high schoolers play a prank on dorky Gabriel, which culminates with him being burned alive in a furnace. To death. Burned alive to death.

Thirty-whatever years later, seven archetypal school kids in detention – rich girl, goth girl, nerd, bad boy, stoner and a couple of ‘normal’ ones – encounter the flying ghost of Gabriel, released when lightning strikes the furnace during an unseasonable storm. The teacher disappears, the kids break out, play around, flirt, some get killed by the ghost, others by a teen possessed, then there’s some nonsensical ending about a corporeal ghost blah, blah, blah… Turns out all seven are the children of the pranksters from the prologue but it’s never explained why they and only they end up in detention.

Detention is awfully made: I’d hazard a guess most of the budget was lost on getting the late David Carradine to cameo as the principal. The CGI effects work is genuinely among the worst I’ve ever seen and the never ending storm just looks tacky. Even the rain seems to have been added in post production.

A good turn by Mitchell raises proceedings slightly but nothing else that happens is of any surprise to anyone not starring in the film. The two ‘good kids’ are predictably the only ones left standing at the end and the person with the British accent is, of course, evil. Loads of motifs are lifted from Asian ghost-girl horror and thoughtlessly welded to the slasher opus, leaving the film to slip in the gap between genres.

They might consider playing this movie during high school detention to compound the punishment. tagged with death on campus, get your own ideas!, slasher, star power