One wrong turn deserves another 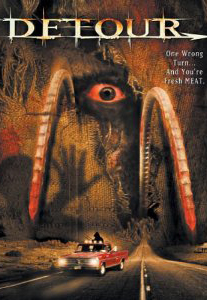 Bearable cash-in on the fan-success of Wrong Turn and retitled the mouthful Cannibal Detour: Hell’s Highway for UK DVD, I once got crucified by some horror snobs for saying it wasn’t that bad. Like I’d compared it to Black Christmas or some such. Some people can be a-holes over the most trivial stuff.

Anyway, seven LA clubkids spend the night raving in the middle of nowhere and begin the long trip home in their RV intent on picking up some wonder-pot at an abandoned army base off the beaten track.

As in all road-based horror movies, there’s a gas station attendant on hand to warn them off but they fail to take heed and hang up the vehicle somewhere between checkpoints. One of the gang hikes back to the gas station while another pair disappear for some outback sex. Before long, they’re set upon by a large number of whacked-out freaks who favour stranded motorists as their main food source. 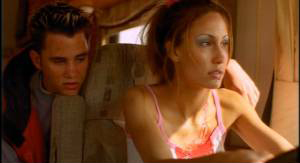 It’s this idiot and the two bubble-brained party girls who emerge as the only survivors. Initially dim-witted, lollipop-sucking Tara morphs into an ass-kicking Xena chick, saving the other two and making the right kind of decisions.

Plenty of gore and decent production attributes help to overcome the seedier elements but a better explanation of the gorked-out psychos would have been welcome, but on the whole Detour is probably a little better than it has a right to be. Although it loses points for not killing off Loopz with extreme prejudice.

Blurbs-of-interest: Look out for Tiffany Shepis in the blink-and-you’ll-miss-her rave montage. Kelsey Wedeen was also in Lake Dead.