A Rose by any other name 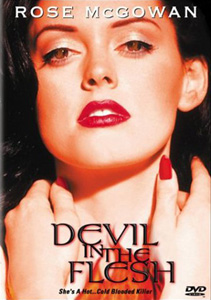 DEVIL IN THE FLESH

“You wanna play Psycho Killer? Can I be the helpless victim? Oh, let’s see… No, please don’t kill me Mr Ghostface, I wanna be in the sequel!” So go Rose McGowan’s awesome lines as Tatum in Scream.

But where did she go after? Not that anybody from that film hit the stratospheric heights of stardom Drew Barrymore ascended to… I mean, where are Skeet Ulrich and Jamie Kennedy!?

Rose ended up here, in this obsessed-woman film that’s about ten years behind the curve, and yet managed to spawn a sequel going by the moniker Teacher’s Pet starring fellow ex-slasher-franchisee Jodi Lyn O’Keefe.

Rose is Debbie Strang, an unhinged teen who develops intense crushes on her male teachers to the point where destroying those who stand in her way becomes her favourite pastime. After burning her first love to death along with her mom, Deb is packed off to live with Piper Laurie-esque grandmother, who calls her a slut once too many times and is thus sent off with the goodwill donations.

While nicely put together and featuring a likeable performance from McGowan, the dialogue is too often feeble and there are a lot of loose ends fluttering – such as the fate of the social worker who’s struck with the kettle?

Okay fare but a bit of a waste of its lead’s talent.

Blurbs-of-interest: J.C. Brandy took over Danielle Harris’ role as Jamie Lloyd for Halloween 6; Ryan Bittle was in The Clown at Midnight.

tagged with after they were famous, get your own ideas!, Scream, slasher