Better the devil you don’t 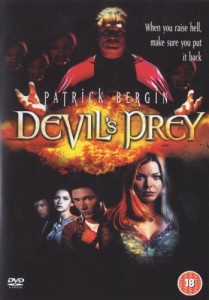 “When you raise hell, make sure you put it back.”

Five L.A. teens drive out to the sticks for a rave and, after being ejected over a fight, are run off the road by a van-load of masked Satan worshippers who are after the blood-drenched girl they found on the freeway.

The kids are chased through the woods overnight and eventually wander into a nearby town where it seems everybody is a part of the sect, known as The Shadows, led by Patrick Bergin’s cloaky fiend.

This Children of the Corn-a-like starts on good form with a good cat and mouse setup, with echoes of the yet-to-be made Wrong Turn (ineffective authoritarians included) but after a couple of midpoint twists are revealed – predictable ones at that – things quickly descend into cheddar country thanks to cookie-cutter Satanist rituals and a pointless, irrelevant sex scene between Bergin and his femme fatale muse.

There’s a final grown-worthy twist stapled on to the end in the name of ‘horror’ but most viewers will probably flag when the chase ends and the idiocy takes over.

Blurb-of-interest: Thomerson was in Fade to Black; Charlie O’Connell was later in Mischief Night.

tagged with after they were famous, get your own ideas!, slasher, slasher films that aren't supposed to be funny but are funny, star power