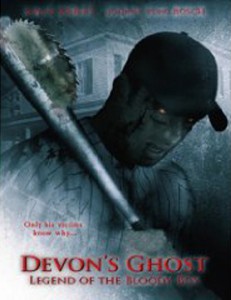 “Only his victims know why…”

Dire-logue: “First day of school and we have a double homicide. How’s this going to look to the school board?”

“Only his victims know why…” – I think I might have a clue too. Could it be that the two leads, who also wrote and directed, are secretly Power Rangers? Laugh at me not, both the Green (Turbo?) and Yellow Rangers of olde lead this merry oddity of a slasher film, which calls itself “a young adult action thriller,” which is, y’know, like when snobby directors insist they’re making more than a body count film. Yes…you are. You really, really are. Ooh look, tits and blood 4 minutes in!

Anyway, in the small town of Canyon City, famed only for the unsolved disappearance of a child a decade or so earlier, there’s a body count problem occurring. Devon’s parents were the main suspects until they were found slaughtered a year later… His childhood friends saw a bloody boy wandering around at the same time. They’re now high school seniors, confoozled by a razor-lined baseball bat toting killer who beats the shit out of amorous couples about town. Nightmare-plagued heroine Symphony (!) and her buddy Josh (the Power Rangers - yeah!!) end up becoming the ones who face off with Devon and use their inexplicably last-second gained martial arts abilities to save the day – with a little help from their friends Freedom, Genesis and, uh, Craig.

Flashing MTV editing does little to counter balance the dismal looking picture quality but the action sequences are well choreographed but remain wildly out of place like a cactus on an iceberg or, as Icelandic crooner Anggun had it, like Snow on the Sahara… It does serve to remind us that nobody’s really tackled a chop-socky slasher flick yet, that could be cool. A fallen Kung Fu protege on a Ralph Macchio mission of DEATH for those who beat him at the crane or whatever it was.

Devon’s Ghost isn’t a total loss, it’s just weird. Really weird. I half expected that evil witch thingy from the Power Rangers to appear, spouting dubbed lines while the Rangers try to organise a bake sale or something. The UK re-titlementization – and its box art – was undoubtedly some half assed attempt to pass it off as a member of the Saw family.

tagged with after they were famous, death on campus, slasher, slasher films that aren't supposed to be funny but are funny, what the hell!?