Who doesn’t love a good exposition? Well, Jason and Michael for two, but in a mystery-slasher, everybody always wants to know why. Why? Why? Why?

Well, the answer you want is not always the answer you get… And conversely, anybody present at the climactic showdown scene is capable of talking utter, utter crap. Beware thy spoilers… 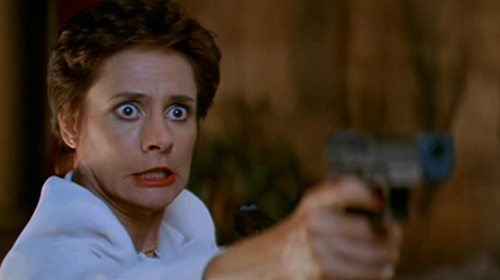 BLOOD HOOK (1985): “I will now proceed to blow the motherfucker away.”

CLASS REUNION MASSACRE (1976): “You mustn’t make me chase you… I could die of a heart attack.”

HEARTSTOPPER (2006): “Get back here, you Christ-infected bitch! When I’m inside you I’ll make you hell’s slut!”

THE MAJORETTES (1987): “Sluts, teases… Flaunting their bodies. They had to be purified.”

YOU BETTER WATCH OUT (1980): “You’re blaming me for all the horrible things you’ve done because of something I said when I was six years old?”

tagged with sequel city, slasher, slasher films that aren't supposed to be funny but are funny, spoilers, the 80s