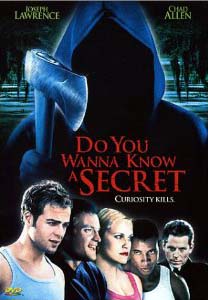 DO YOU WANNA KNOW A SECRET

Dire-logue: “I don’t want you, you’re a control freak.”

This past week has sucked. Someone I know quite literally dropped dead, then my longest surviving fish died, riots, stock market crashes… Thank God you can chillax with a good slasher flick. Or not.

Where the hell is the question mark at the end of that title? Nobody will want to know “a secret” if they are not actually being asked if they want to know. Fail, fail, FAIL!

So anyway… Connecticut college brats drive down to Florida for Spring Breeeeeeeaaaak!!11!!1!!! where the killer who murdered one of their friends the previous year now stalks them. At the scene of each murder, the masked and robed fiend leaves his message (the one that isn’t a question despite trying to be) on pieces of paper, computer screens, carved into the flesh… It’s up to the sonically dull heroine and fucking Joey Lawrence to solve the mystery.

One secret that’s seemingly never revealed is why the kids don’t seem to give a shit about any of their dead friends, still finding time to piss about, laugh and show as much of an emotional reaction as a baked potato.

Finally, when plotting “questions” are solved (in a way that shamelessly rips off Mortuary) and the killer has been laid to rest by none other than Kenickie from Grease, we still don’t know what this big secret was supposed to be! The killer’s motive is way too dull to pass.

And what’s with one guy being knocked out no less than THREE TIMES even though the killer wants him dead anyway. Oops, put in a question mark there – my bad.

All these inhibitors make Do You Wanna Know a Secret nothing more than a resume thickener for the cast of unknowns and something else to be swept under Joey Lawrence’s mountainous career rug.

Blurbs-of-shame: The late Conaway was also in The Curse of the Forty-Niner; Lawrence was Graham in Urban Legends: Final Cut.

tagged with after they were famous, get your own ideas!, I know whatcha did!, slasher, what the hell!?, who finances this crap!?