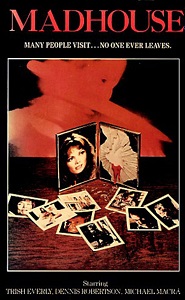 A.k.a. And When She Was Bad; Flesh and the Beast; There was a Little Girl

Laughter Lines: “It’s not the dead that scare me… it’s the living.”

A particularly vicious Italian-American co-production; Director Assonitis, who had previously ripped off Jaws with the endearingly naff Tentacles a few year earlier, now turns his attentions to the slasher surge with this Halloween/Psycho combo, which is certainly gutsier than many of its contemporaries, even throwing a deaf child on the heap of bodies.

Julia is a teacher for deaf children, and goes to visit her mentally ill twin sister, Mary, for the first time in seven years, as their birthday approaches. Upon finding that Mary is deformed due to an unspecified illness, Julia flees and later learns sister dearest has escaped and, with the assistance of a well-trained Rottweiler, is doing away with anybody who enters Julia’s life. Hiding away in the rooms of the empty boardinghouse Julia shares with her hippie landlady, Mary may not be the only one with questionable intentions when it comes to Julia’s wellbeing.

Things start off well in this good looking film, but as it goes it becomes annoying and by the finale it’s gotten so ridiculous with a sub-Happy Birthday to Me party-of-the-dead climax, you’ll be considering checking yourself into rehab to recover. Assonitis delivers the goods on a visual level: It’s gruesome with realistic looking dog-maulings, but is probably best saved for a drinking game movie night.