Don’t go in the house. Or the basement. Or the cemetery. Just leave. 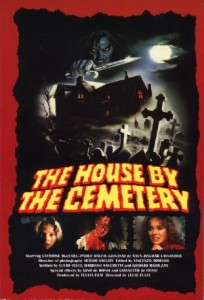 THE HOUSE BY THE CEMETERY

Dire-logue: “Ann, mommy says you’re not dead… Is that true?”

Cooool title and cooool poster. For me though, that’s where the coooolness ends.

It’s Italian, it’s dubbed badly, it’s Fulci, it wants to be The Shining, it makes next to no sense. As far as I could tell, the Boyle family – professor dad, squealy jittery mom, and blond moppet Bob – are moved into the old Freudstein house. By a cemetery. Two teens were killed there in the prologue so we know more than the Boyle clan already.

Little Bob is friends with a girl, Mae, who it seems nobody else can see. She says cryptic things and tells him not to go in the house etc… Meanwhile, Realtors and babysitters drop by and whomever is loitering in the seemingly unlockable basement totters in and kills them horribly. There’s some weird shit going on with the childminder, who resembles a mannequin we see randomly decapitated earlier on, stares a lot, and cleans up massive pools of blood that nobody questions.

Much ado is made about the experiments of Dr Freudstein but it was both boring and incoherent, made worse by the absolutely atrocious dubbing, for which it seems that Bob was voiced by a thirtysomething woman whose scream could shatter all the glass in a church.

Being an Italian horror flick, the gory violence is almost exclusively angled at women and the end comes shackled to a twist that isn’t at all comprehensible. According to Fulci, it’s something to do with the relationship between the children, but I read theories on time travel, limbo n’ all sortsa crap. And the zombie-monster-killer thing regenerates his cells by killing folks. Or something. There was a vile poo-like substance dripping from him when he was stabbed.

There are comparisons with Amityville and The Shining (which Fulci thinks is crap) but it’s more of a crumbling slasher flick with supernatural factors. The fact that they go unexplained lends to the creepiness of the film, as it did in the likes of Ghosthouse and I’m probably the only viewer who didn’t hate the kid with a fiery passion from hell. I actually thought he was quite sweet – nothing like the obnoxious back-talking brats they’d put in the role these days.

Is it a classic? Shrug. I laughed at it a bit. A couple of sequences were well done – Bob trying to escape from the basement. But I’m not a fan of crazy, haphazard all-over-the-place horror (wait ’til we get around to The Texas Chain Saw Massacre) so I won’t lose any sleep if I never see it again.

Blurb-of-interest: Frezza (the kid) had a bit part in A Blade in the Dark.

tagged with accents from hell, gore o'clock, rip-off central, slasher, slasher films that aren't supposed to be funny but are funny, the 80s, weird-ass twist, what the hell!?