Don’t not do what they said don’t to, do what you don’t not feel like not doing 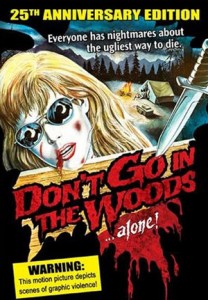 DON’T GO IN THE WOODS

“Everyone has nightmares about the ugliest way to die.”

Dire-logue: “Peter! That could’ve been a fatal mistake, jumping off a log!”

One of the many horror movies of the “Don’t…” oeuvre of the early 80s, Don’t Go in the Woods may have the achieved the notoreity of finding its way on to the Video Nasties List but it’s possibly even more well known for being a hysterically inept exercise in how not to go about making a slasher film. It’s that film you saw when you were 12 and thought you were so tough for sitting through. At 25 you realise it was just crap.

Starting with silent credits and then aerial footage of some mountains that looks as if the camera was mounted on a vibrator, atop a washing machine in an out of control prototype helicopter, DGITW quickly piles up a worthy body count as a girl running along a stream dies, then a birdwatcher gets his arm lopped off and a couple of oddly dressed day walkers die. We don’t get to see the killer or even really how any of these people die but it’s fairly comical, given that all the audio was dubbed on afterwards to ‘improve’ the sound, rendering any dramatic nuance lost in horrible sounding dialogue that’s either shouted or whispered. 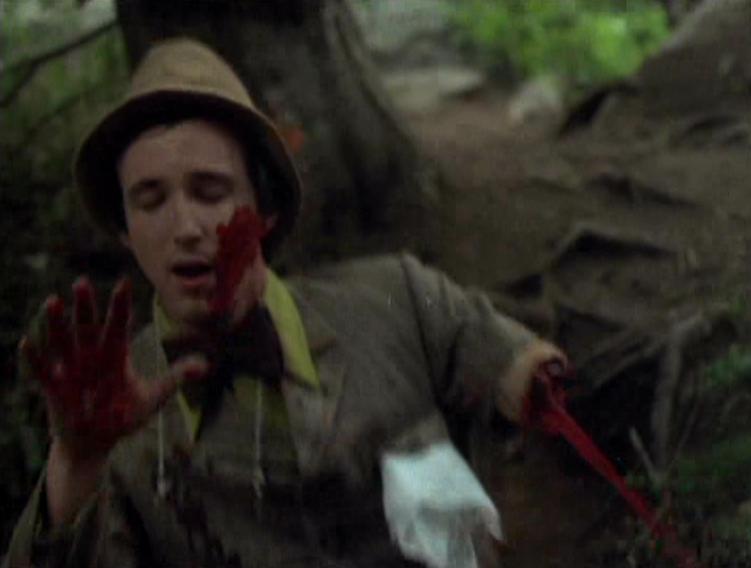 Don’t wear an oversized bowtie in the woods

We meet our quartet of dreary central characters, pink-shirted Peter, know-all man o’ the wild Craig, and two women who are virtually identical save for hair colour, Ingrid and Joanie. Between random murders, we return to the group to listen to Craig droning on about survival and how man is the most feared animal of the woods until he is mercifully the first one killed off.

The others scatter and while Joanie goes it alone, Peter and Ingrid discover more bodies, kill an innocent bystander and find their way to safety only to run back into the woods to search for Joanie and finish off the killer, who, in the meantime, has killed a couple in a VW camper, an artist, a fisherman and – somewhat randomly – beheaded a guy in a wheelchair. Why the fuck would someone wheel themselves up a mountain unaided? The guy even falls out of the damn thing at one point. And why was there an unsteady girl on rollerskates earlier on – are we to believe she skated up the mountain? 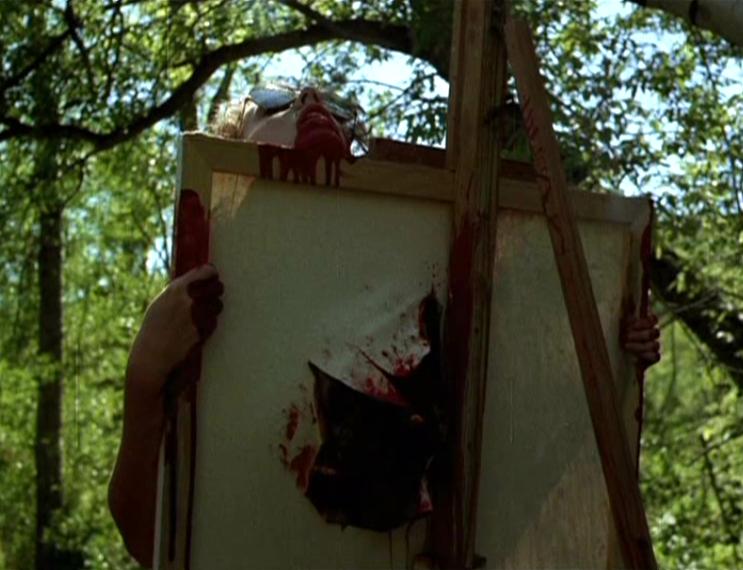 Don’t know the hell that is? She’s been skewered through her painting

There are numerous other questions raised by the sheer randomness of this project: the killer, when finally shown about halfway through, is some beardy guy who jangles when he runs, yet nobody hears him approaching… One early victim is tossed off a cliff face and lands on some rocks literally five feet from some people playing in a waterfall and they totally don’t notice!

Eventually, when Peter and Joanie defy the title of the film and return to the woods, they take with them a hunting party, the almost perfectly spherical sheriff and a fucking doctor from the hospital. Things end in a suitably nihilistic way (possibly the scene that got it banned) and it wraps with a stultifyingly horrendous song that can must be heard to be bought.

Don’t Go in the Woods sucks. It sucks so hard I feared that it might suck a hole in the fabric of space and take us all with it. But it’s funny as hell and worth seeing for a dare if nothing more. The dubbing situation is amusing on its own but when coupled with the abysmal acting of virtually all involved, it just becomes one more reason not to visit Utah. 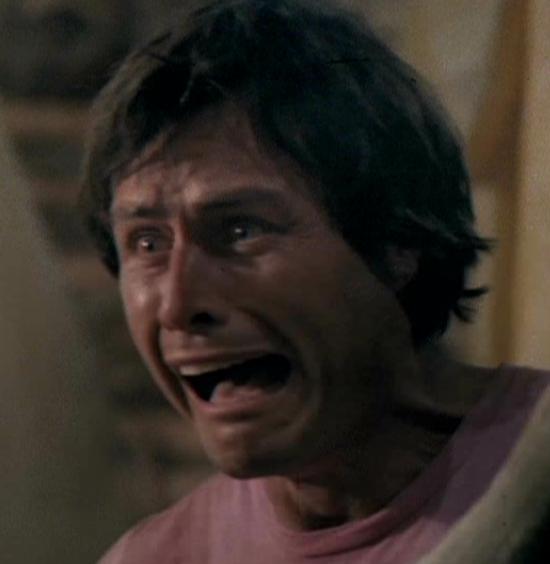 Don’t give up the day job

Blurbs-of-interest: Mary Gail Artz (Ingrid – redhead) became a successful casting director soon after this faux pas and has credits on a lot of big films, including Halloween II and House of Wax in the horror realm. Angie Brown (Joanie) was in All-American Murder.

tagged with before they were famous, gore o'clock, slasher, slasher films that aren't supposed to be funny but are funny, the 80s, what the hell!?, who finances this crap!?