Keep calm. There’s a douche bro inside your house. 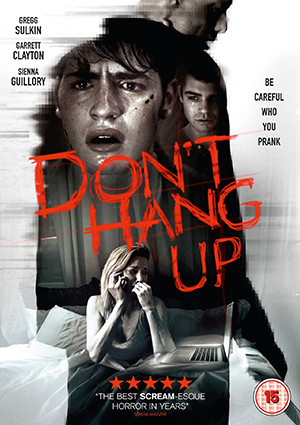 “Be careful who you prank.”

Terror is ‘gendered feminine’, which is why most horror posters feature a babe in peril, why we have final girls rather than boys, and why it’s always a girl alone in the house when the strange phone calls begin…

But what if instead of Scream‘s standard tormented-female, it’s a couple of teen boys who are the ones plagued by creepy calls? Welcome to Don’t Hang Up.

In spite of the above, things begin with a woman who answers a call in the wee hours to be told the cops are surrounding the house because there is an intruder and she needs to block herself in the room. She freaks, worries for her daughter, and just as the policeman tells her they can see the intruder is coming towards her, it’s revealed as a prank.

Douchier than douchey dude-bros Brady and Sam are behind it, with a couple of other douches, and they load their clips online for the LOLZ. Yeah, they’re total toxic assholes and we want them to die from the off, more so when Sam, pining over his distant girlfriend, decides to play Ed fucking Sheeran for long enough to make me contemplate switching off.

The boys get together one night at Sam’s while his folks are away and record a few more phone gags, pretending to be cops telling folks their spouses are dead, ordering pizzas for the neighbours, then calling said neighbour posing as Neighbourhood Watch to tell them thieves disguised as pizza delivery guys are working the block… Assholes.

Then they get a call back from a calm voice who tells them not to hang up, calls them a few names and is generally a bit creepy. They laugh it off and crack a beer, but the guy keeps calling, eventually dropping one of their names into it to get their attention. Seems they’ve pissed the wrong person off.

The caller, allowing himself to be referred to as Mr Lee, plays his hand slowly, showing them he has Brady’s parents stripped and tied to chairs and they’ll die if either of the boys try to leave. The phone signal has been hacked so any attempts to call the cops are redirected back to the stranger, secrets the two of them have kept from one another are revealed, and their punk friends are also being murdered.

For a what-would-you-do dilemma horror, Don’t Hang Up does well enough, insofar as being able to explain away the things most of us would think about trying without the solutions being too obvious or the characters too stupid, and things culminate in a fairly predictable but fitting way. This is one film that actually benefits from the main characters being dicks, as they’re entirely deserving of the horror unfolding on them, with ye olde central slasher pic motif of the prank-gone-wrong. 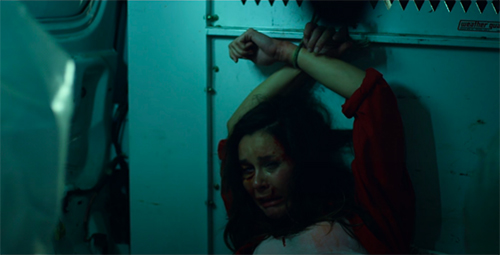 One part When a Stranger Calls, one part Joyride, another part Unfriended – but with a body count and emphasis on guys being terrorised for a refreshing change. Good stuff.