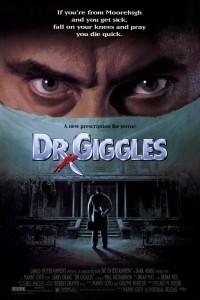 “The doctor is out…of his mind.”

Dire-logue: “Get ready to take your medicine, Moorehigh: the doctor is in.”

“The town’s got a doctor and his name is Rendell, stay away from his house ‘cos he’s the doctor from hell…” So goes the jump rope chant that the residents of your common or garden American small-town-with-a-past, in this case a psychotic Doc who offed several patients trying to find a cure for his ailing wife.

35 years after it all went down, Dr Rendell’s son (Drake) – who was never found – is now a fully grown lunatic standing over six feet tall and handily escapes from his institute and returns to Moorehigh for a comedically grisly revenge on the townfolk he perceives murdered his dad.

By 1992 there was very little left to explore in slasher film territory until Scream came along and shook it all up just four years later. Much of Dr Giggles is recycled from things we’ve already seen and leans heavily on the later Elm Street‘s for its comedic roots and the likes of low-renters like Psycho Cop.

Nevertheless, Drake’s charm and the corny jokes combined with a good cast make it a pleasant diversion and it’s interesting to see a young Holly Marie Combs in one of her earliest roles as Jennifer.

Best moment: Rendell says “it’s time to do what Doctors do best,” and grabs a golf club.

tagged with before they were famous, get your own ideas!, slasher