Wake me when it’s over 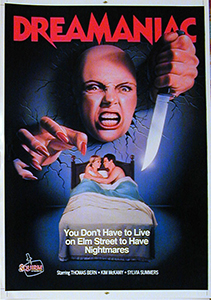 “You don’t have to live on Elm Street to have nightmares.”

Laughter Lines: “Do I know you?” / “I doubt it, I’ve gone to private schools all my life and I’m rich.” / “Oh that’s right, you’re Francis! I thought I recognised those small tits.”

Back in the 1980s, I bet many a disappointed video renter plucked this one from the shelf, thinking it was going to rival Freddy Krueger for some intense scares.

In typical mid-80s style, nobody’s ever seen or heard of a slasher film, so they all wander off alone, have sex, don’t leave when the power goes out, allowing Lily and a possessed Adam to knife, electrocute, and bite the dick’s off the party guests.

Some of them seem to come back as zombies and need to be killed again, but I wasn’t sure about that… The Spanish copy I watched had quite a bad resolution. 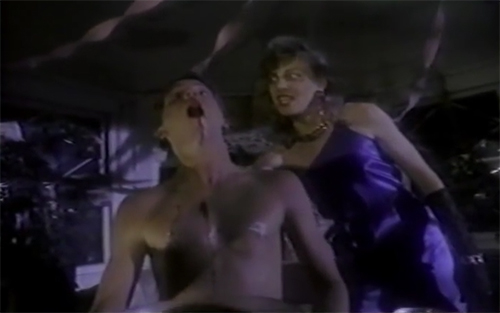 A ‘joke’ is added to the end for reasons unknown, it’s a bit funny, but more or less negates the previous 75 minutes and the entire USP of the film, but DeCoteau was churning out these babies left, right and centre so I doubt anyone really cared. There’s a fair splattering of gory denouements and at least he populates it with his trademark array of easy-on-the-eye menfolk with their shirts off.

Blurbs-of-interest: Kim McKamy was later in Evil Laugh; DeCoteau turned in what may be his only other slasher film (?) in 2001, Final Stab.

tagged with get your own ideas!, Nu-di-ty, slasher, the 80s, weird-ass twist, what the hell!?