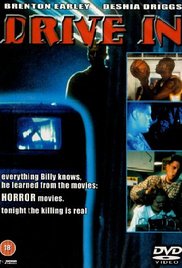 Hulking retard Billy Morrow has never permissibly left the confines of his house, where his neglectful, politically obsessed mother keeps him under lock and key and supervised by a bitchy camp houseboy. He derives all pleasure from staring at the drive in across the street, which plays endless gory Troma films.

One night, Billy is pushed too far, kills his carer and escapes to stalk the teen patrons of the drive in theater in an imitation of what he sees on screen. Victims include many a necking-teenager, plus the refreshment stand girl, security guard, and local drug dealer. And although the murders aren’t nearly as gory as those glimpsed on the film screen – mainly stranglings and bludgeonings – Billy shows some potential by impaling a poor sucker with a sign pole and burning the face off another in red hot nacho cheese…!

This so-so quality shot-on-video flick also hinges its theme around the violence-in-entertainment issue: The assumed nominal hero is a dateless high schooler who spouts that statistics that slasher movies influence true-life crime, and Billy’s mom’s fiancé is more concerned about gaining bad press for their campaign by being seen in the sleazy drive in than he is about the growing stack of corpses about the joint.

There’s dodgy acting galore, both in the Troma clips (which include that shoddy electrocution from Girls School Screamers and Beware! Children at Play) and from the teens-in-peril, but given its meagre price tag, this still has virtually everything that Drive-In Massacre hasn’t and is about ten thousand times better. The final girl goes for it big time, shrieking “Why don’t you just DIE! DIE! DIE!” and there’s a cast member named Hud, which is always good.

Beware of the DVD box, which features several stills that aren’t even in the film.

tagged with Nu-di-ty, slasher, slasher films that aren't supposed to be funny but are funny