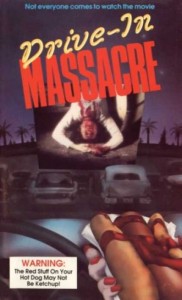 Pay to rent it, pray to forget it. Although, I must say the taglines shown on this particular artwork are pretty cool, spesh that WARNING: The red stuff on your hot dog may not be ketchup. Hell yeah! But here the good times endeth.

Pre-dating the main flux of slasher films by a few years, Drive-In Massacre only flirts with the accepted conventions, beginning well enough with a grisly double sword-murder at a Californian drive-in. Everything is then punctured and it deflates like a bouncy castle, smothering all the kids as it dies when we meet two boring cops (Barnes and Lawrence) who investigate the murders, focusing in one a guy who likes to spy on lovers and “beat his meat” – but then becomes one of the next victims.

There’s no final girl, no group of happy teenagers being bumped off one by one, only a handful of murders and a whole other story about some abused little girl running away from her nasty daddy that just begins to ‘happen’ towards the end.

There’s then the ‘twist’ – the killer just stops murdering people and we don’t find out who it was or why he/she was doing it. All of these elements make this THE worst slasher film I’ve ever seen. I loathe it to the very core of the fire of a thousand suns.

tagged with I want to die, slasher, spoilers, weird-ass twist, what the hell!?, who finances this crap!?